On Sunday 25 February 2001 Tomas organised the first group-expedition of this season. After exploring the rooftops and deserted houses of Delfshaven we took the car South, towards the new Benelux tunnel.

But on the way to the southern tunnel entrance we almost ran into a traffic-jam in the tunnel. I decided on "plan B" and we swerved off the highway on to the northern tunnel entrance. The tunnel construction site was guarded by a solid fence and gate. We moved to the east, to the Wilton Feijenoord Shipyard. They are reconstructing the area and most old buildings have been demolished already. But we entered a dry-dock an looked around in the huge concrete basin. We were 8m under the river. Had anyone opened the huge steel door at the end we would have drowned like rats. 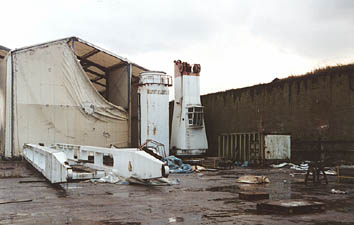 Inside the "dry" dock. We were able to climb both the white structures through the inside.

A dismantled crane was standing in the dock. It was able to open the door of the tower-like segments an to climb inside. They were two floors high and full of machinery, cogwheels cables and oil. One of the doors was so rusted that we broke one of the hinges.

Two gigantic tents were standing in the dock. Empty, but huge, covering a 10*10m area. 10m to the top. Why had I left my climbing gear in the car? The floor was covered with a slimy mixture of pigeon-shit and moss. 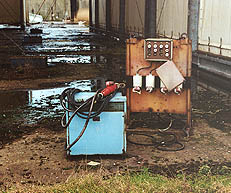 A forgotten welding transformator in the rain. In the background one of the tents from the inside.

Before we left the dock we built a scarecrow from old raincoats, gloves and junk we found in the area. We took a group photo together with "Mr Urban Adventure". 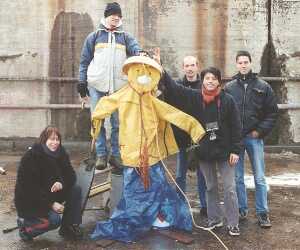 The UANLC and Mr. Urban Adventure.

The high crane on the quay was blown up recently - we climbed it with Ben last summer. At the end of the quay is a small building. During the expo with Ben I only took a snapshot through the window. Switchboards. The door looked locked. But Fred sees a power-cable hanging from the window. On a hunch he pulls the cable - and the door unlocks! 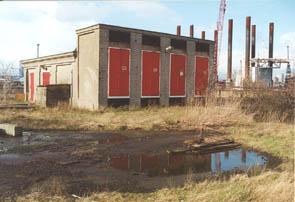 The electricicty building. We didn't know yet what was hidden inside.

We enter a room with switchboards - several switches have a sign "Don't turn" hanging from them. It looks deserted but we hear a faint 50Hz hum. I warn Fred not to use the telephone on the desk but Ben says "I tried it already, it doesn't work." 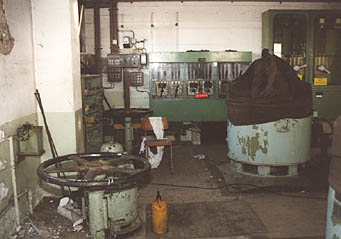 Switchboards, valves, pumps. Notice that every pump has a cool cap on it's head.

We descend down the stairs and enter a cavernous space with walkways and large Frankenstein-like machinery. It looks like snail-shells. This must be pumps for the dry-dock. The floor is covered with water. Fred puts the spout of a fire-extinguisher in the water and pulls the handle for a moment. "Brooofffff!" The CO2 bubbles wildly and makes us jump. We leave and carefully close the door behind us. 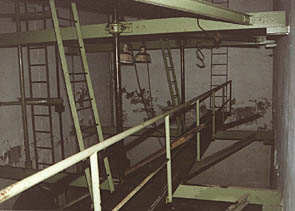 We finally visited a large floating platform along the quay. There were many holes in the steel surface. You could see the water sloshing around inside the steel structure. And some holes went through all the way into the river. Ideal dumping ground for bodies. I always think: "If one of us would slip and fall inside, how do we get him out?" I would have to use the glacier-crevasse rescue techniques. 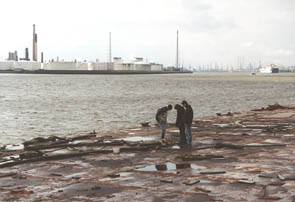 In places like this I'm always impressed with the speed nature takes over civilization. If you leave a spot alone it will be overgrown in no time. And rust, moulds and bacteria attack our artificial materials. These little negelected spots should be treated as treasures in the over-regulated city landscape. But I'm afraid that they will clean out these miniature jungles and make them predictable again. 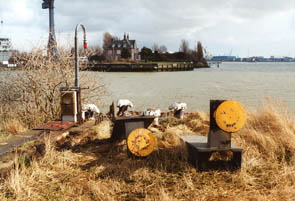 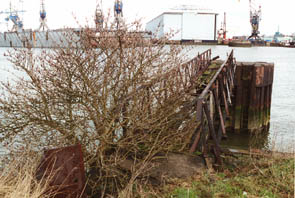 © 2001 Petr Kazil - Are they also erasing the industrial parts of your town? Mail me at (obfuscated) kazil a.t euronet d.o.t nl