The new Benelux tunnel runs parallel with the old Benelux tunnel. The old one has 4 lanes of car traffic. The new one will carry 4 lanes of cars, two metro tunnels and a bicycle tunnel. Pictures of the new tunnel in the dock are here: www.euronet.nl/users/kazil/ogrcmetro.html Scroll down to: "Construction of the new Benelux line". Here you can see all lanes and also the very narrow cable tunnel that we entered.

We discover that the terrain of the Wilton Feijenoord shipyard connects to the tunnel-building site. We can bypass the fence and gate! The area looks deserted. When we arrived a car was parked on the terrain, but it's gone now. A few minutes later we are looking several floors down a steep concrete cliff, looking for a way to the bottom. 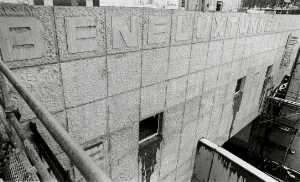 Looking down into the Beneluxtunnel - Ben's picture

Solid scaffolding with comfortable stairs brings us to the road surface, but we're on the wrong side of the fence. It's a very solid steel fence, made out of tubing, with sharp spikes on top. Should we use the scaffolding to climb over? *** We find an opening at the bottom that we can sneak through with a lot of effort and we almost tear several coats.

*** No, you shouldn't. It's dangerous to do this without ladders and a thick protective layer. Recently a Rotterdam student severely wounded her arm and hand when she tried to climb one of these fences. She impaled her arm on one of the spikes and had to be rescued by the fire brigade. - And I saw a TV programme where a lady tried to climb such a fence. Her upper leg got impaled on one of the spikes. The fire brigade had to cut a piece out of the fence toe release her. She was transported to the hospital with the piece of fence still in her leg. They were separated only later, on the operating table. 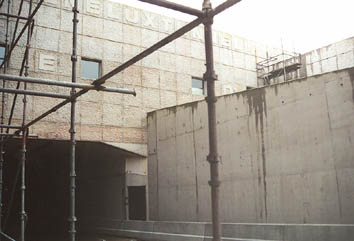 The inviting entrance - Notice the door in the middle, the cable tunnel.

We wait for Ben. He has returned to the car to get his flashlight. We hide from a wintry shower and with my binoculars we study a white object on the tunnel wall. Is it an alarm-sensor? Unfortunately it looks like one. But is it connected? Will it work? In the meantime Fred and Tomas put a long ladder against the wall and Fred climbs into a rectangular hole in the wall. But it doesn't lead anywhere. 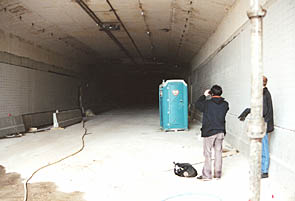 Ben inspects the alarm sensor - It's the whitish spot on the left wall.

Ben returns and very carefully we approach the sensor. We choose the middle path, a very thin and crowded cable tunnel. But Tomas takes the main tunnel and sticks his head almost in front of the sensor. Nothing happens.

Boldly he pushes on into the tunnel, but then the next sensor goes off and a howling noise fills the area. We look at each other in panic. I decide to flee, together with Karin and Fred. But Tomas says "Now that I've set of the alarm I might just as well walk through the tunnel to the other side of the river." Ben will go along with him. "Well, you know the worst thing that can happen is a NLG 60 fine." Quickly we exchange cellphone numbers. Tomas will call me from the other side of the river and we'll pick him up. 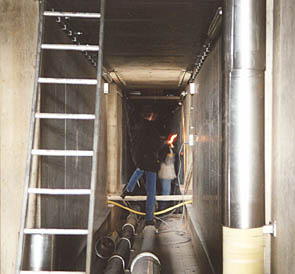 Fred and Tomas (with headlamp) in the cable tunnel - Another sensor on the right wall.

Our trio retreats through the hole under the fence and up the scaffolding. No one is around. Then the alarm stops. We explore the quay and slowly walk towards the car. Then Fred says to Karin: "Well, now that we've fled I feel a bit stupid. Especially because the alarm has stopped." Karin agrees. They turn and go back to the tunnel. I walk to my car over the shipyard looking for more places to explore and I wait for Tomas's call.

It arrives earlier than expected. "Hi, we're on the other side, and the coast is clear." "OK, I'm coming to pick you up, call me if it takes too long." As I approach my car a police-van stops and a thickish, bearded policeman opens the right window and says: "Sir, by nature we're curious people, please could you tell us where you're coming from?" I tell them about the shipyard and the crane and about photography, being careful not to mention the tunnel. I have no idea if they believed me, but they wish me a good day and leave.