In 1999 Dan Armstrong and I were exploring the building site of the second Benelux tunel. They were filling a large part of the old harbour (Vijf Sluizer Haven) with sand. The new tunnel runs under all this water. But you don't see the water because it's all been filled and / or excavated. The low triangular shape on the left is the old Benelux tunnel.

I found a nice white hard-hat on this site, and I still carry it with me in my car. On the way out we were met by workers. "Is that your car that's parked inside our gate?" I was afraid they were going to ask about the hard-hat I had in my hand. "Please take it outside quickly, because we'll be closing the gate now, and we'll be coming back on Monday." Ooofff! If I hadn't met these guys they would have locked up my car ... 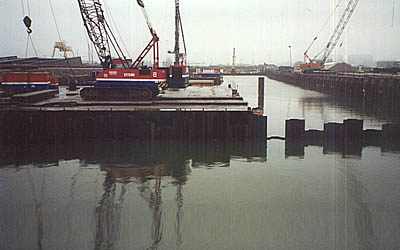 Dan's picture of the filling activities.

During our visit we slipped through an open gate. From here we could look straight into the Benelux tunnel. You can see the highway (A4) on the right side of the picture. This is the Northern tunnel exit. Southbound traffic is on the left, Northbound traffic on the right. Look carefully at the path in the middle. It will feature in the next paragraph. 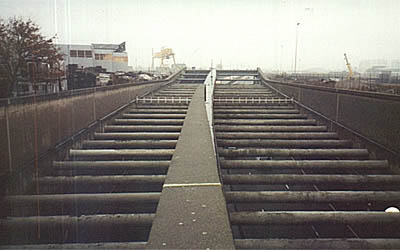 Dan's picture of the tunnel

We were just about to explore further but we noticed several camera's that were guarding the exact spot we were standing. Why should there be such security around this tunnel entrance? I revisited this place the next weekend but all the gates were closed and the place was inaccessible.

Second visit with the UANLC

In February 2001 Tomas organised the first expedition of this season. After we had set off the alarm in the new tunnel I drove to the other side of the river to pick the crew up.

A nice drive though deserted terrain and oil refineries brings me to the southern side of the river. This is the other entrance of the Benelux tunnel. I find Fred, Karin and ###, but where are Ben and Tomas? "Look, there they are ..." To my amazement I see that they have climbed onto the middle wall of the old tunnel, and slowly they're crawling to the other end. They make it towards the end and look down onto the traffic below. 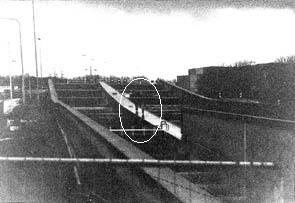 The picture didn't turn out right, but Ben and Tomas (the two dots) are on the middle path of the tunnel.

There are no railings, and if they slip they will fall 4 stories onto the highway traffic. They're also very conspicuous. Bus 74 drives by and the driver stops to look at the sight. She might call the police through her radio. I'm relieved when they return safely and undetected. "Yes, the snow made the middle part very slippery." 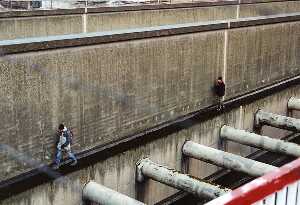 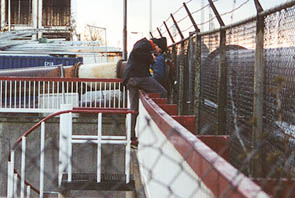 Tomas and Ben on the return trip - Ben climbs out of the tunnel and over the barbed wire.

I may not be the bravest of the group, but the hot tea and cookies I brought are appreciated. Then we try to jam 6 people into my Mitsubishi Golf and we fail miserably. (In hindsight, we might have stuffed one group-member into the trunk, and then we would have succeeded.) The group splits up Ben and Tomas remain to explore the surroundings. I go with Karin, Fred and ### to collect the cars. Now there's a traffic jam in the other direction through the tunnel. I find out that one lane is closed for no apparent reason. In the meantime I give up trying to invent a plausible story if I meet the policemen again in the same spot. But no one notices us. With some delay all three cars arrive at the southern end of the tunnel.

And even if you don't intend to trespass you should visit this spot. It's very romantic. And the ventilation buildings of the old tunnel are beautiful. They blend in very well with the industrial landscape.

The ventilation - and management - building of the Benelux tunnel.