Sunday 25 February 2001 - Tomas organised the first group-expedition of this season. The UANLC met in the kitchen of his newly squatted house in Delfshaven. No heating, but the water was already connected. Electricity was borrowed from an artist who had her (legal) workshop in one of the lower floors. We sat around the kitchen table drinking coffee in our winter coats. 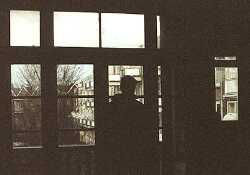 The view from Tomas' kitchen into the unkept gardens.

Tomas had to work hard to get inside the building. First he had to climb the balcony at the back of the house and then he had to remove the bricks that barricaded the door from the outside. Then he declared the house "his own" and went to the police to inform them of his action. Tomas doesn't harm anybody - the houses will be demolished, together with the whole neighbourhood. The police-officer at the bureau reacted calmly and he told Tomas that in principle they had nothing against squatters in these doomed houses. But some squatters were not bona-fide and rented the houses to dope dealers. Tomas will have to await the decision of the municipal authorities. Maybe he'll be evicted, maybe not.

Update: Tomas will not be evicted in the near future. He has been offered a "no cost" contract to use the house. He has already given his house-warming party. 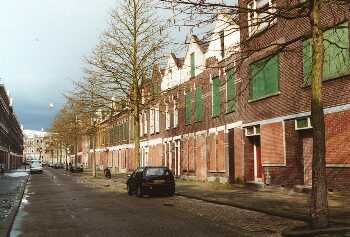 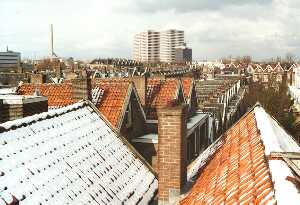 The doomed quarters of Delfshaven.Lots of parking space for my car.

We explored his house and enjoyed the view into deserted back-gardens (almost all the houses are bricked shut). Then we climbed up onto the roof. We had a nice view of the sea of local rooftops and the high office-buildings in the city centre. The fresh snow made it feel very dangerous. One of the roofs had been planted with grass and weeds. It was slippery and I didn't dare to go very near the edge. 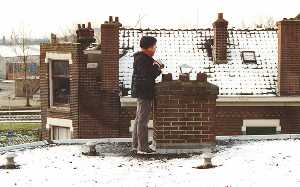 Ben is taking pictures of the view.

Through a roof window we entered one of the other houses. All the other windows were boarded shut and it was dark on all three floors. Tomas put on his headlamp and we felt like speleologists in a new cave. We saw some curious leftovers from the previous inhabitans: a room where cannabis was grown illegally, a large pentagram painted on one of the floors, innocent shopping lists, electricity bills and a body-builder's training programme.

The view form the roofs was very satisfying. A sea of old red rooftops, decaying bricks, bare trees. And some interesting fragments of the Rotterdam skyline. I always have problems photographing the skyline. The buildings on the horizon are almost always over-exposed, even though I try to compensate by choosing a shorter shutter time.

The view West. From left to right: GAK building, Erasmus medical University, the Erasmus bridge (faintly), the Kop van Zuid and the Euromast.