The railway artery - From South to North 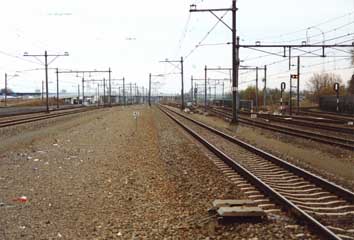 At this point Rotterdam stops. If you follow the railway further south you'll end up in Barendrecht. And even further south is Antwerp, Brussels and Paris. This is a legal view, from the platform of station Lombardijen. This is as far as you can get without passing the "entry forbidden" sign.

The viaduct in the distance was under construction until recently. The gravel-bed had been laid, but no rails and no overhead wires. We visited the viaduct with my son. Then we were definitely trespassing. I'll publish the pictures someday. 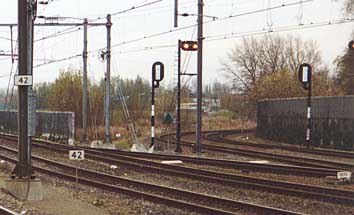 From the same platform you can a fork in the railway going West, towards the harbour. This railroad is only for goods and containers. Long trains with a lot of diesel locomotives in front take this curve, going from Rotterdam to the German Ruhrgebiet and even to the Czech Republic and Poland. 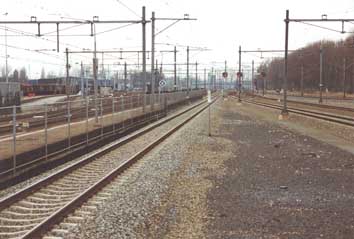 Again the view from station Lombardijen. But this time you're looking north, towards the city. The Central Station and city center lie approximately 7 km in this direction. The fast train will take you there in 6 minutes.

Even with good 10*50 binoculars it's impossible to see through the optical noise of the poles and signs. I would like to know how far I'm looking in this picture, but it's impossible to determine. One day I should point a laser beam in this direction, and then see how far North I can trace it. There's a building and a bridge in the background, but again it's impossible to identify them with certainty. I think the bridge is the "Stadionviaduct" only 1.38 km away.

This is the view North from the Stadionviaduct. On the right is the station belonging to the Feijenoord football stadium (De Kuip). The european football champinships were played there in 2000. You can (barely) see the walkway from the platform going right into the stadium. On the left, at the horizon two famous Rotterdam bridges: "De Hef" and the Willemsbrug. Straight ahead is the "Varkenoordse viaduct", only 800m away. 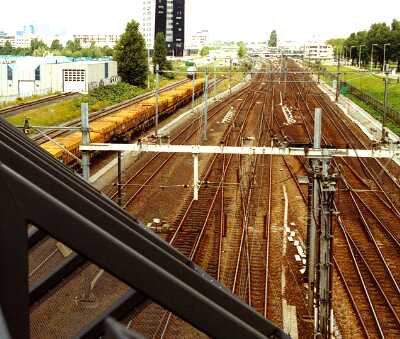 Looking north from the Varkenoordse viaduct. The next viaduct you can (barely) see is station "Zuid", only 450m away. Then the train dives into the train-tunnel. This interesting pice of infrastructure has a page of it's own. We've been inside, but we were spotted almost immediately and we fled. 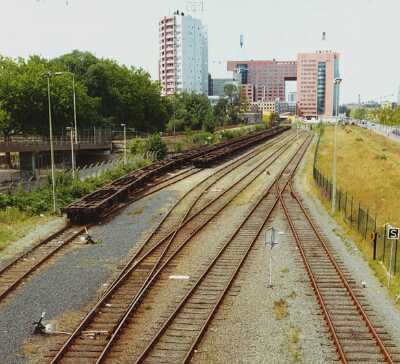 A small branch of the railway goes left after the Varkenoordse viaduct and ends in this shunting-yard. This the end of the road. Probably this terrain is doomed. The locals cross the tracks directly - they don't bother to go over the viaduct that I took this picture from. I read that there's a wagon at the end of this emplacement that is the home of one local junkie. The low viaduct at the left belongs to the metro, you can enter the metro tunnels from here (illegally).

The high building on the left is the 1989 appartment building that I already infiltrated. It has a nice view. The building with the hole has been featured by me as an urban curiosity. Through it you can see the "Masstorenflat" on the other side of the river (Westzeedijk).

After crossing the river you end up at Rotterdam Central station.

Or you can go West towards Hoek van Holland or The Hague. First you'll pass Schiedam station. Then you'll drive along this incredibly straight track between Schiedam and Delft. This section is 9km long and really perfectly straight. Another great spot to fool around with laser beams.