Train viaduct - Between Moordrecht and Gouda

You can park your car at "Het Weegje" and then walk through the fields to this viaduct. There is an empty grassy triangle between the rail-tracks. You have to cross the tracks once, so look out, there is quite heavy train-traffic here.

Alternately you can descend from the bridge and walk along the tracks. Eventually you will be next to, and under the viaduct.

There is a small piece of pure nature here. Some concrete slabs are left over from the construction. I lay on them in the sun and watched green birds who chased butterflies. A flock of starlings rises up in the air, and when I look better I see some bird of prey high in the air. 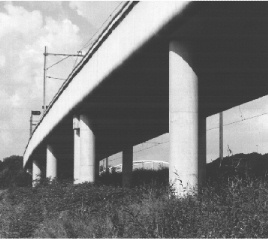 Next to the viaduct is an old, large willow three where the birds were singing. Along a path next to the viaduct there were a lot of ripe blackberries. All the time trains pass. I wonder if the passengers notice me. What do they think? 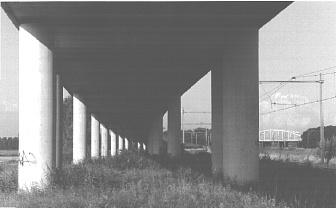 Several people have written their graffiti here: Urban Kiddies, KRV, DBB. Usually the best graffiti is so complex that is becomes unreadable. 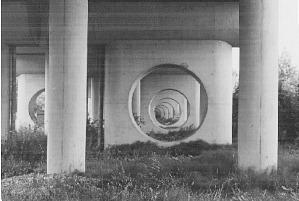 On the other side of the river the viaduct has this beautiful shape. It's not wise to infiltrate here, because this is the site of the "Zuid Holland Dog Trainers Club".

You can't see it in the picture, but every pillar has a small door at the top. Probably it is hollow on the inside. These doors look locked.

Back to: Unusual places, Home