Stoopweg - A road the city forgot

Take the A20 highway east. When you see a police-station on your left you're driving on this overpass. Here's the place where the police stores all the cars that they've towed. For NLG 250 (I think) you can get them back again. One day I'll write down all the numberplates and I'll publish them on this website (just joking).

Climb through a hole in the fence - or through the gate - usually it's open. Explore the space under the overpass - dusty soil, bricks, stumps of trees. In the background maybe the remains of a bum shelter. It would be possible to climb the steel bars on the ceiling, and maybe I should try some bridge-swinging from the ceiling, and maybe not. All this changes when it's raining. Waterfalls descend from the ceiling (broken pipes) and fountains spout from one of the pillars. Small streams flow gently everywhere. Yes, in the rain it's definitely more exciting. The dust turns to a very sticky kind of mud however. 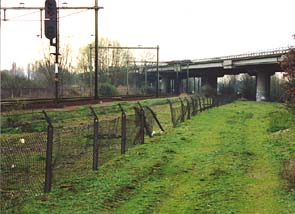 But once you emerge from under the overpass you enter a magic, unexplored wilderness. The wilderness is only 10 - 20 meters wide however. It's flanked by the highway on one side and the railway on the other. Thousands of people see this strip while driving to work. But no one ever comes here. 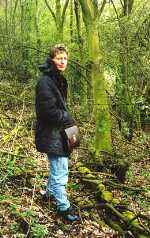 This was the one and only expedition where my wife agreed to come with me. I had promised her that we would visit "wild nature", not some ugly deserted industrial site. 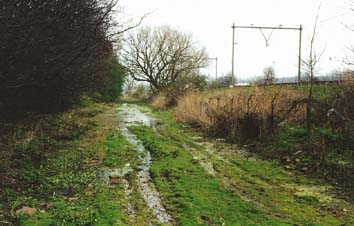 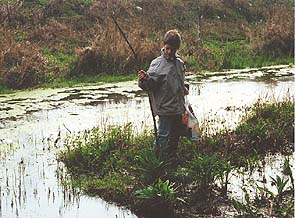 Even in the dry season the water level is high and many places are flooded. For my son this was an extra bonus and an opportunity to test his rubber boots. He went through the middle of the swamp. We took the high road through the bushes and kept our feet dry. 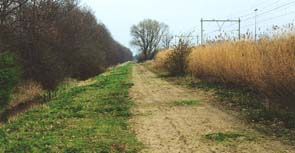 See, if I has shown you only the picture at tthe left, you would have thought that you were in the country (for example Drente, near Emmen). But there's no way you can forget the highway on the left with it's massive flux of cars. 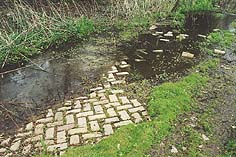 You can follow the road for two miles and then you emerge at the Terbregseplein. In many places you can find traces of a lost civilization along this road: decaying pavements, mysterious wooden posts and even patches of flowers and shrubs that must have belonged to a well-kept gardens. But now everything is overgrown with weeds, willows and birches are growing through the pavement.

I've returned to this place several times since I discovered it. It's not entirely forgotten though: