Discovered this site on 15 August 1998. This half of the area is abandoned and looks as it it will be demolished in the near future. Notice the nice laminated wood beams. It's at the end of the Sluisjesdijk / Waalhaven NZ / Harbour nr. 2140. I've found no documentation about this area yet.

On 29 August 1998 I explored the area with my son. We met a security guard who said: "Oh, if you only want to take pictures you may go in through the hole in the fence."

On 5 September 1998 I took a guided tour of the harbour. The guide told me that the site contained a "fertilizer terminal". I thought it was salt, so I'm glad I didn't taste it. But he also told me that all the people who worked at this terminal called this stuff "salt" instead of "fertilizer".

This is a gigantic vacuum cleaner used to suck the fertilizer out of the ships. From here the fertilizer is put on conveyor belts that cover the whole area. 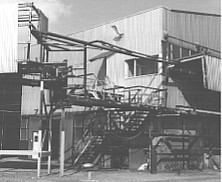 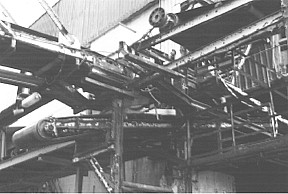 The conveyor belts are used to transport the fertilizer from the ships to the warehouse and also to the trains. The machinery is covered with thick peeling layers of paint and rust. This is the outside view. 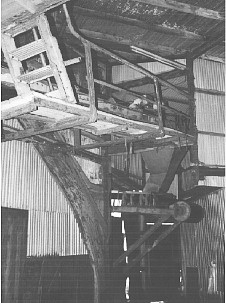 This is how it looks on the inside. 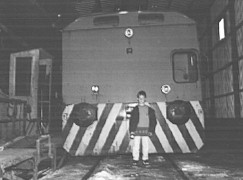 One of the sheds hides a fully operational locomotive. It's a "Windhoff" locomotive built in 1980 (nr. 130653). My colleague who likes trains told me it's a small industrial locomotive used for shunting train-carriages. 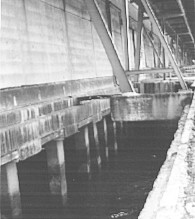 The whole area is built on concrete poles. You could take a boat and float under the whole factory building and all the sheds. I would like to do that sometime in the future.