The fortress was designed in 1867 to defend the city of Utrecht against artillery fire. Construction started in 1868 and was finished in 1875. As soon as the fortress was finished it was outdated. It had been designed to withstand classic (non explosive) artillery shells. New shelters had to be built to withstand the impact of explosive shells with a gunpowder charges. But this was also a short lived solution. In 1885 the brisant-grenade (using dynamite) was introduced and it had an explosive power 16 times as high as gunpowder. No fortress was strong enough to withstand this, so the whole fortress concept became obsolete.

This is one of the "bomb-proof" shelters. 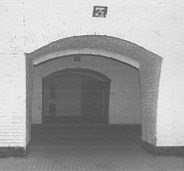 On the inside there are long, dark, corridors. These connect rooms that had very different functions: storage rooms, sleeping rooms, kitchens etc. Because the temperature and humidity are constant, all kinds of old materials are stored here. For example: 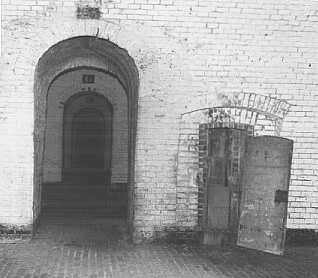 Rainwater filters through the layers of sand and earth that cover the bombproof shelters. It is led through brick pipes and is stored in a big reservoir (swimming pool size) onder the fortress. On the right you see one of the brick pipes, it was covered by a small wooden door. The water is cool and has an excellent quality. 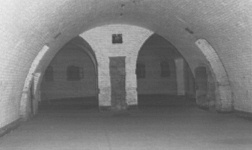 This is the middle bastion of the "reduit". The "reduit" is a small fortress inside the fortress. If the fortress was breached an elite force could withdraw into the reduit and could defend the fortress from there. The walls are 3 meters thick brickwork. At the end of WWII canadian forces filled a room with spare explosives and detonated them. The walls cracked, but the whole structure stayed in place and it is still rock-solid. 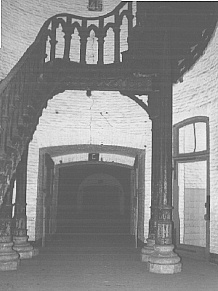 This is the entrance to the reduit. There are three floors and a cast-iron staircase. The door on the right is the officer's toilet, they had privacy. The soldiers had to use a communal toilet.