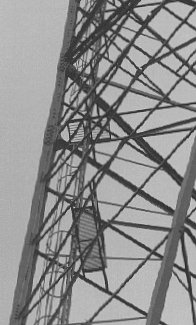 The most enticing feature of this island is this enormous tower. Everyone who sees it gets impressed and starts to take photographs immediately (really, I saw several groups of bird-watchers do this). It is really nice. Especially if you stand directly under it and look up through the symmetric "lacework" of the beams. I omitted this view here because it's so damn predictable ...

Ofcourse I've been looking for climbing possibilities. Theoretically it would be possible to climb up to the second platform without getting near the power cables. There are only three obstacles to overcome:

Maybe I'm going to do it someday. At least up to the first platform.