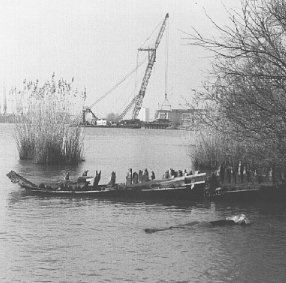 I visited this island in February '99 just as the first spring flowers were appearing. If you want to visit this island you have to look at the tide tables first. At high tide some paths disappear under the water. The difference between high and low tide is approximately 1 meter.

Most of the island is covered with thick, tangled, willow bushes. The banks are overgrown with reeds. It is surprising to find such wild nature so close to heavy industry. The island itself is quite old, but it's full natural state has just been restored in 1993.

Notice the skeleton of the old wooden boat (oak) in the foreground.