The "Hofplein" is a well-known city square in the city center. In the middle is a fountain surrounded by a busy traffic circle. It's a frequented and well maintained city spot.

But if you walk a bit further from the glamour and glitter you find an obscure train station at the other side of the train tunnel. This is the "Rotterdam Hofplein" train station. 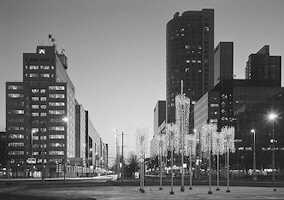 Once this was a respectable secondary station to "Rotterdam CS" but now it serves only one train line: the line connecting Rotterdam with The Hague CS.

Here you're looking towards the end of the line. The railway runs on top of the old train-viaduct, at a height of aproximately the second floor. The viaduct was built in 1905 and it runs on stone arches reinforced with steel beams. The spaces under the arches are used for storage (for example of barrel organs - really!) and small grocery shops. 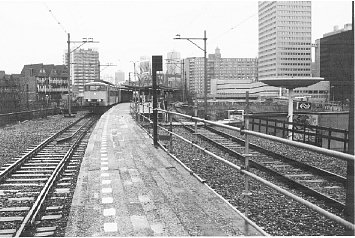 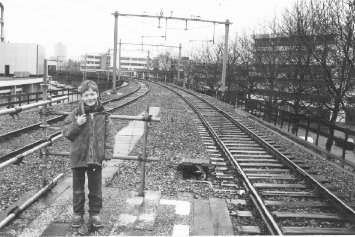 The next station on the line is "Rotterdam Bergweg". It lies in an old, relatively poor part of town. Not all the trains stop there. It is a bit dilapidated, dirty and covered in graffiti.

From the platform of this station you are loking towards "Rotterdam Hofplein". The opposite platform was in use in better days, but now the entrance is covered with asphalt. You can get there by crossing the rails. The buildings look a bit deserted but I haven't checked them yet.

The distance between the two stations is approximately 1000m (1km).

If you walk on top of the viaduct you'll cross several streets and one city square. These streets are relatively calm except for the last one the "Bergweg", this is a busy road. You'll be looking into the gardens, bedrooms and onto balconies of the houses that run parallel (and quite close) to the viaduct. In the beginning of the route you'll pass a college and some office buildings. 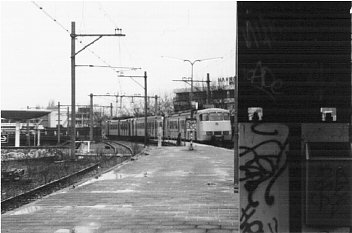