Interesting features of some stations - legal

All of the stations are guarded by closed-circuit video cameras connected to security stations. There are 7 security stations that are spread approximately every 6 stations. They are always manned by one security guard with 10 monitors. The cameras show the entrances, exits and an overview of the platforms. No tunnel views. The camera's are always active during business-hours. You can see the camera-pictures by looking at the security monitors through the windows of the security rooms. These are situated at the stations:

There are 600 camera's in the 42 metro stations. In tootal there are seventy monitors in the security stations. Every camera-view is shown for 30 seconds. That means that a cycle through all the camera's takes 4 to 6 minutes.

During business-hours stations are guarded by mobile teams of 2 guards who also check the tickets of the passengers while they're on the train. I don't know what happens during the quiet hours.

The small "Entry forbidden" gates do not lead to alarms.

There is a steel walkway running through the middle and along the sides of the metro-tunnels. In most places there is enough room to let the trains run past you. I don't know how severe the wind-drag would be if that happened.

The electrified "third rail" carries 750 volts and can be fatal. Fortunately it is covered by an insulating sheath on top and along the sides. So the risk of elecrocution is relatively small. The collector uses the under-side of the rail to get it's current. The rail is situated in the middle, between the rails so if you use the walkway you don't even come near it.

The platforms are cleaned every day, but not the tunnels. There is no periodic cleaning or maintenence inside.

There are no infrared detectors or alarm systems in the tunnels.

The ventilation shafts at Gerdesiaweg might be another entry point. Just at the end of the platform there are ventilations shafts. Once you're inside you are invisible from the tunnel and from the platform. There is not much to see there and it leads nowhere but it would be a first step. This shaft is only accessible during operational hours. The trick would be to get in between two metro-car-arrivals unnoticed by camera's and passengers. I've thought that I could try this plot:

In fact every station that connects ground-level with the tunnel-level might be a good entry point:

I received several hints from readers but I don't know if they're useful:

Where are the other explorers?

I'm certain that lots of other people have been in the metro tunnels illegally. There is a lot of graffiti in the tunnels. No large/complex graffiti there, only tags. So I assume the writers never stay long. I have tried to make contact with the writers but all my attempts have failed. 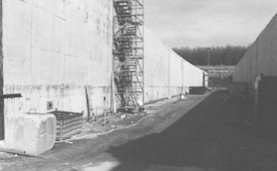 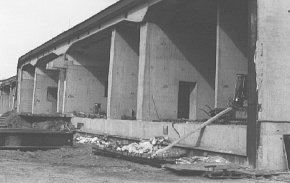 I have visited the building site last year during a (legal) excursion. We were shown the sections of the tunnel that will run under the river. At the moment they are actually lying on the river bottom already.

On the right you can see the different tunnels that run through the section. 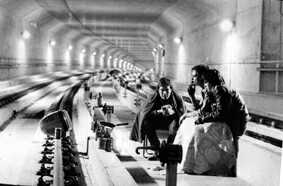