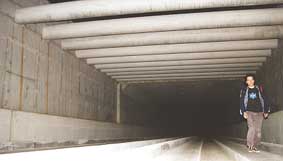 Ben coming out of the beautiful entrance. - You won't see this nice view from the cars.

Thursday 22 June 2000 we explored a further part of the Benelux metro-line. It's still under construction. At 20:00 I collected Ben from the train station, picked up Walter at his home (and admired his new cats) and we drove to the metro tunnels. We knew the ideal parking-spot from our last expedition.Then we walked through weeds and over stacks of building-material to avoid climbing the fence. 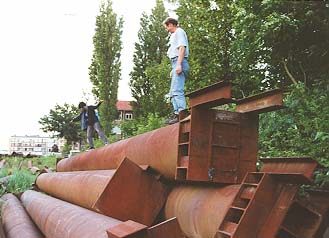 But this walk ended up on the road without finding an easy entry. Ben and Walter then climbed the fence anyway, but I was too lazy (read: scared) and decided to walk the perimeter and to look for a hole. On my way through the brambles I stumbled and cut my arm on rusty screw in the fence. When I found my hole (read: unlocked entrance) Walter and Ben were cheerily walking the construction site while I was licking my wounds (literally).

The cut after three days. Now (October) I still have a scar on my arm that probably won't go away. The wound must have been deeper than it appeared. 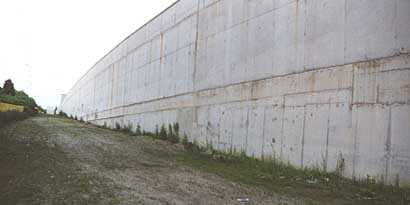 The outside wall of the tunnel. - Looking for a way to get on top.

A fenced ladder lead to the top of the fly-over. I ducked immediately, because we were easily visible from the high appartment building next to the track. I suspect that older, wealthy people will have an active vigilate attitude.But we were covered by the football-finals on TV. No one was looking out the window at this moment. 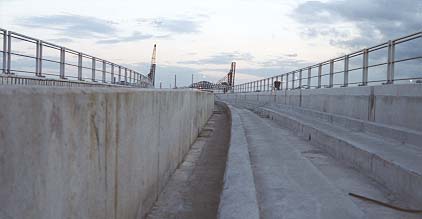 Looking down the metro-track towards the south. No rails have been installed yet.

We walked down the track and entered the dark tunnel. This tunnel was less interesting than the first-expo tunnel, no rails, no nuts and bolts (nice souvenirs!) only rough concrete being poured. We found two emergency exits and stairs halfway but they were locked from the outside. We saw a lot of lamps, and we followed the cables, but couldn't find a way to switch them on.

As always I was afraid of being caught and I was spooked by strange sounds. Looking towards the tunel entrance I thought I saw a moving silhouette. But looking through my binoculars I saw that it was only a treetop moving in the wind.

The other end of this tunnel-section was blocked by a steel fence. But Ben found a door with an open padlock, and we entered the new metro-station. We heard children's voices in the distance and we would have been clearly visible while crossing the station. The following section of tunnel was well lit but we decided to end the expo, because it was already 22:30. Time flies during an expedition. 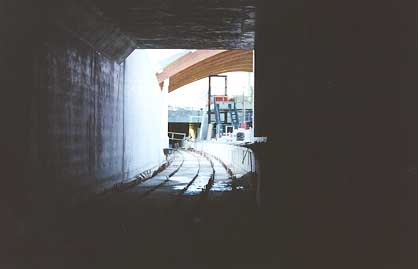 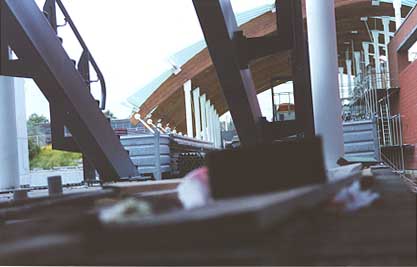 The new station, looking north towards Schiedam. From behind the fence. - Under the stairs.

On the way back it was dark and the yellow streetlights created beautiful shadows on the tunnel walls. we were able to make spectacular photographs. Especially the combination of natural evening-light combined with the orange glow of the streetlamps. By this time we were so bold that we experimented with the flash, without fear of being discovered. we were on the way out anyway. 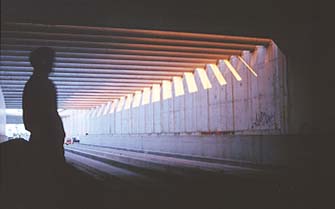 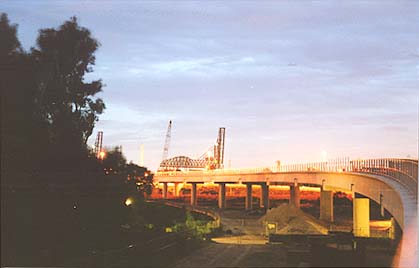 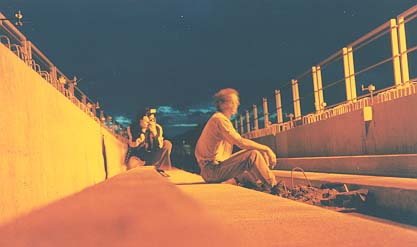 A modern-day Ruysdael painting. You can see the fence we climbed over. - Walter and Ben in streetlight.