The first bunker expo - 11 August 2000 - As always the group meets at Rotterdam Central Station. Tomas, Iris and  Iris arrive in time. Ben is too late and we leave without him. We meet Fred, our guide, at Hoek van Holland station. Because he's a truck-driver by profession I expect a rough, hairy-chested, tattooed person. But he's a friendly, thin, techno-type person. 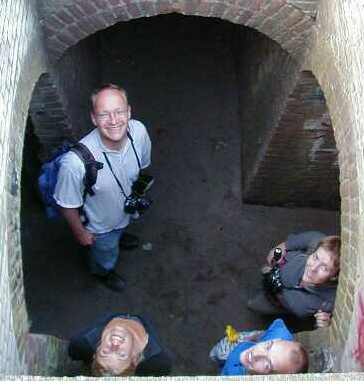 Pictures by Tomas and Ben are marked with asterisks (***).

Entry - We park the cars on the boulevard next to the well-known bunker entrance. We enter a long tunnel and end up in the command-centre overlooking the dunes and the sea. Through a narrow horizontal slit you get a 180 degree view of the sunset. Graffiti and garbage from previous explorers are everywhere. 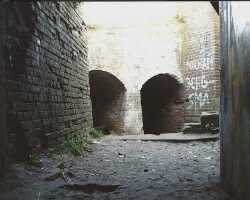 Tomas in the command bunker and sunset light - Tunnel, looking away from the sea - Bunker in the moonlight ***

Historic underground - Through the long, winding tunnel we enter several bunker complexes. Fred tells us he has seen many informal parties here. Sometimes small scale - a running scooter provides the current for two turntables and a lamp. Fred: "Notice that the tunnel is not straight. There are many bends. These were built on purpose. A straight tunnel would be dangerous, because a single enemy soldier would be able to shoot everyone inside. Now there are many corners to hide behind."

We see the remains of an old airco-installation, some old steel doors and some rusty ladders, but everything else has been removed or vandalised. I search for authentic signs, texts or graffiti but I can't find anything. We perform the well-known caving experiment - and yes, with all flashlights out it's pitch dark and dead silent. 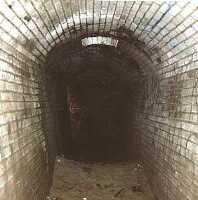 There are rumours of long tunnels running all the way along the coast but no maps are available. Fred's father works for the army, and he's a middle-manager in the archives, but even he cannot get access to the original bunker schematics. It seems that all Dutch fortifications are classified information, even if they're not in use anymore. Even the official plans of the fortresses from 1850 seem to be unavailable. (This was later confirmed by a colleague who lives in Hoek van Holland.) 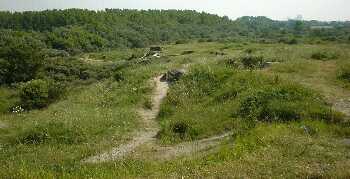 The dunes - Picture by Fred Kerkhoven

Illegal landscape - Then Fred leads us through holes in barbed-wire fences, through small dune-paths and we enter the deep bunker. I notice that the Irises are very silent. "Yes, we like the expedition, but being in the bunkers makes WW-II so tangible. It's not pleasant to realise that real German soldiers were living here under the ground." By now it is dark and we admire the view from the dunes. On our left side all the lights of the harbour. On our right a long queue of ships arriving from the sea. Beautiful. I didn't I take the tripod for the camera, but I also made the beginner's mistake of not bringing a spare roll of film. I had hoped to borrow a roll, but there were only digital camera's in the rest of the group. Modern times ... 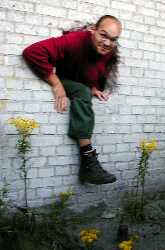 Tomas: This is the way to use the hole. - Testing the wall for climbability (too easy). ***

Fred: "In fact it's illegal to be here, but I've never been caught or questioned. However, I've met a lot of other explorers and party-goers in the dunes and down in the bunkers. Usually they were friendly or indifferent."

Beer and stories - We finish the evening with a beer at the quay. Fred tells about his work as a truck driver (he likes it), Iris and Tomas talk about stunt-teams and architecture and I talk about art. The usual subjects ... We decide to keep in touch.

On the way home Tomas tells us how he takes samples of "Grolsch" beer to the ships in the harbour. The sample is given to the captain and the brewer hopes to sell more beer afterwards. The policy seems to work, because Grolsch is the major supplier of ship-beer in Rotterdam. It even works on ships from Islamic countries. The beer is delivered and bought, but the invoice has to say it's for "refreshments". On one ship however the captain was a devout Moslem and Tomas left the ship with the beer-sample. The crew saw this and while the captain wasn't looking they lowered a rope so the beer-sample wouldn't be wasted.

The second bunker expo - 6 September 2000 - I meet with Ben at Rotterdam Central Station. Just the two of us! That will be a scary exploration of the bunkers at Hoek van Holland. Large groups feel a lot safer. 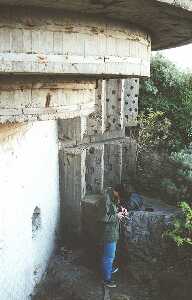 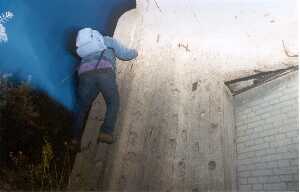 Ben, preparing his camera in front of the entrance, notice the hole in the wall. - Again testing for climbability. ***

Entry - Park the car at the boulevard. Easily find the hole in the barbed-wire fence. A short trek through the dunes leads us to the bunker. Fred was a good guide, I can still remember the routes and landmarks he showed us on the previous expedition. I show Ben the foundations of the German anti-aircraft cannon. We're on the roof of the bunker. A car on the boulevard slows down. Are we too conspicuous? Will someone come after us? I'm not afraid of the authorities, but of the locals who might see this as their territory. The graffiti in the bunkers is not gentle.

We enter through the small hole someone has un-bricked. Fred had taught us the right technique - first one leg inside, then your upper body and finally the other leg. Any other sequence will get you stuck. Ben hands me the rucksacks and camera's and follows inside.

Traces of 1940 - We're in a living-room sized space. On the left and right walls there's authentic German graffiti. It shows the dune landscape, viewpoints, angles and distances. Probably it was meant as an aid in aiming the cannons. Unfortunately it has been spoiled and defaced by more modern graffiti. 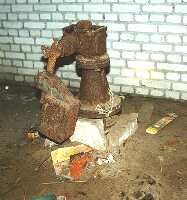 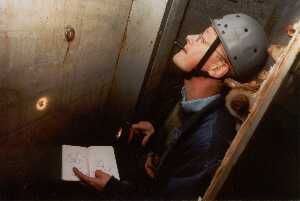 Small rooms - Two small side-rooms are empty, except for modern debris like spray-cans, bottles, cans and burned paper. The third contains a rusty hand-operated water-pump. We go down the stairs. Immediately it gets cooler and damper. 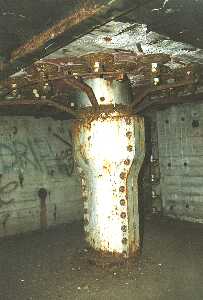 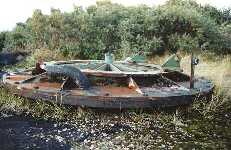 Stairs going down - Possible cannon-foundation, under and above ground

Cannon ? - The lower room contains a weird construction, probably further support for the cannon on the roof. According to Fred this was an anti aircraft cannon. To me it looks very modern. 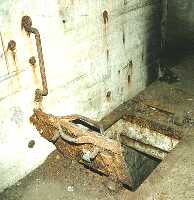 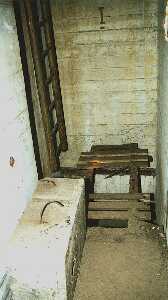 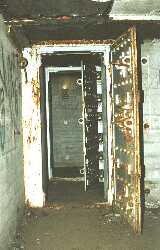 Maze - A hatch leads to an even lower room, but Fred had told us that there's nothing special inside. Small, but very heavy steel doors lead to two smaller rooms, and then to several more heavy doors and more small rooms. It's a miniature maze. A rusty gun-rack, a winch and a ladder are authentic. Some walls still show the original room-codes and even construction-notes in pencil.

Rust - During the previous expedition Fred told us that we would find particles of rust in our hair for days afterwards. I thought he exaggerated but he was right. Fred also told us that if you were alone in the bunkers you would start imagining things. I try to draw a plan of the lower-floor maze, but Ben tells me he hears footsteps. We run up the stairs and towards the exit, but it was only an illusion. Fred was also right with that one! 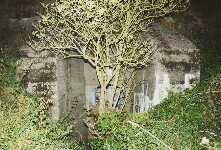 Dead ends - We explore several holes in the sand but they're all dead ends. They only lead to small rooms without further exits. Two other bunkers look accessible, but the first one has it's door welded shut. The text on the door is authentic: "Zutritt verboten". 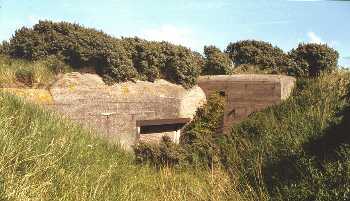 The impossible to enter bunker - The surprise map, discovered only later

Surprise - The second one has a small un-bricked hole leading to a large room but we can't see if it leads anywhere interesting. We can't discover a way to climb through the hole without falling on your head. We're defeated. - Later while scanning the pictures I discovered a map on the wall. You can see houses of Hoek van Holland and the church. If we bring a ladder next time we may get a better picture.

Links and more information - We are not the first visitors of the bunkers. Many people have been there before us. And these people have done better research than we. Look here, this is their homepage: http://www.home.zonnet.nl/atlanticwall/index.htm And here are the same bunkers that we have visited. You'll recognize the sights: http://www.home.zonnet.nl/atlanticwall/hoekvhol/bp14b/index.htm .