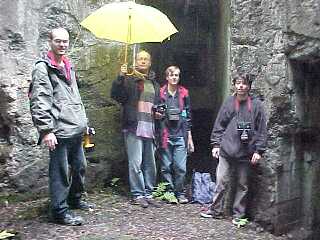 I rose at the horrible hour of 6:00 to meet Ben and Tomas in Delfshaven at 7:00. When I arrived  I had a voicemail on my cellphone from my wife - Ben had woken her at 6:30 to tell her he wouldn't be in time. She wasn't even angry! We waited for Ben at Central Station. Finally around 8:00 he arrived - his early train had been cancelled. With an estimated travel time of 2,5 hours we still might be in time for our appointment with Jim Hollison.

We worked our way South through roadwork's and speed-limits. In Antwerp Ben and Tomas recalled their expo to the harbour and to the metro tunnels. The highway even passed the harbour: "Hey, the boat we explored is gone!"

Behind Antwerp I tried to make up for lost time and I drove 160 km/h all the way to Luik (Liege). Jim's description was excellent, but still we had to ask twice before we found the "Zone Industrielle" and "Avenue no.1" and finally his budget hotel. The "Formula 1" hotel is made out of plastic and looks completely artificial. I slept in one in Freiburg (Germany) and my wife got totally depressed and still threatens to divorce me if I ever take her into such a creepy place again ...

A young man climbed through the first floor window to welcome us, so that must be Jim. We climbed in through the window and crowded into the small room. Several maps of Luik were spread out on the tiny table and the bed. Streetplans, topographical maps. I was impressed, this looked like professional planning. This was Jim's second day here and he already knew his way around.

We woke Jim's accomplice and I paid for his coffee - it came out of a horrible coffee-machine and must have been the worst coffee he ever tasted. The hotel owner gently pushed us out the door with his broom and we were on our way.

Jim had found a whole ring of fortresses around Luik. Some were in use, others were deserted and we went for the nearest one. We parked front of a large 18th century farm and followed a country road to the fence. It looked like rain so I took my bright yellow umbrella with me. "So much for our camouflage" Jim said "You'll look pretty conspicuous with that!"

We slipped inside through a gap between the fence and the gate and we entered a green, wild canyon between two high brick walls. High weeds and bushes everywhere. Old broken machinery, a crane, an electricity switchbox, old scales, a broken telex-machine. Empty rooms on both sides. Brickwork with large holes; were they cannon- and bullet-holes, or just erosion? We didn't know. 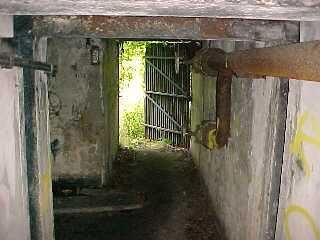 The entrance - Picture by Jim Hollison

Jim showed us the real entrance. Past a broken diesel-engine into the tunnels. A maze of small rooms, doors and signs. Sometimes we found deep holes into lower floors. Stairs went down to a lower level and then even lower. It was moist and cool here, water condensed on the rough concrete and we discovered a deep well that was so clear that you didn't see the water when you shone your torch into it. A hole in the brickwork led to an even deeper level in the foundations, water was flowing there and we didn't go inside.

We followed the lower levels and found a mummy-shaped tunnel one level deeper. We saw the hooks where many cables had run along the walls, connecting all the rooms of the fortress (telephone?, electricity?). A shaft led upwards at a 45-degree angle. Jim and Tomas climbed it, but didn't find an exit there.

At last we seemed to have found an exit, part of the bricks had been removed, but the steel door behind that was welded shut. We could see the outside through the cracks.

We went back through the tunnel and found a rusty ladder leading three floors up. We climbed it but it was scary, the rust flaking and cutting into your hands. I estimated that 30% or more of the iron was gone, already one of the rungs had broken! I had brought my rope and climbing gear, but it was in the car. 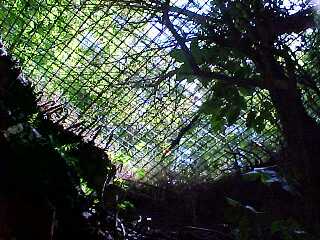 Jim scrambled over a concrete beam - a 2+ floor drop on each side - and almost slipped on broken stairs covered with rubble. He had almost slid into the hole! "There's no exit here. You could climb the wall but at the top it's covered with a thick wire mesh." Now I was worried - no way was I going to climb that rusty ladder again! There was another exit and now I crawled over a concrete beam with drops on each side. Here a part of the roof had collapsed and I was afraid the rest would come down on me. But Jim had shouldered part of the risk and now I had to take my share. But here the exit was also blocked.

But while we were risking our lives Ben had been exploring our level and he found a way to our original point of entry. So now we could relax and enjoy the scenery again. A large hall, another pit covered with wire mesh, more tunnels and even more collapsed roofs and walls. Every time I passed such a section I thought: "This must have collapsed once - is there any guarantee it won't collapse now?" And I remembered the reports of mountaineers crossing avalanche terrain: "The shorter you stay in dangerous terrain the smaller the risk." And I hurried onwards.

We finished this part of the expo by climbing on top of the fortress and admiring the wilderness that grew on top of them. Now a warm sun was shining again on a wet, tangled jungle of bushes and wildflowers. We had been underground for two hours! As I left the fortress I thought about the wooden boat that was decaying near the entrance - who would ever need a boat here?