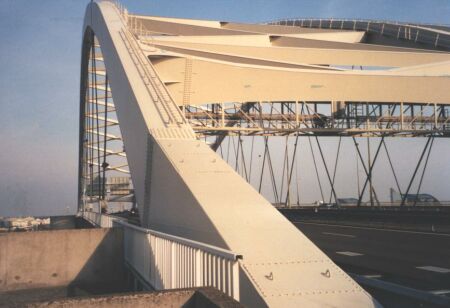 Introduction - In the sixties, to relieve the Maas Tunnel route through the city, the Rotterdam ring road was constructed. The Van Brienenoord Bridge (1965) formed the eastern river crossing. The bridge grew into the largest traffic roundabout in the region and the most infamous bottleneck in the Netherlands. It was therefore decided in 1984 to erect a second bridge to the west of the first. ln 1989 the second Van Brienenoord Bridge was floated in over the river. The number of lanes was doubled to twelve. 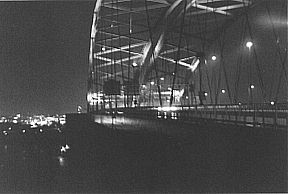 The bridge consists of a steel main span, a bascule bridge with a navigable width af 51 m and at the north and south sides a shore bridge of nine spans af 50.75 m in prestressed concrete. The total length is approximately 1300 m. To hinder shipping as little as possible a main span of 287 m proved essential. The arch is connected by diagonal steel tension cables to steel main girders 3.90 m in height that carry the road deck.

The forbidden side - On the East side there are two lanes for pedestrians and cyclists. This is the official route for non-motorized traffic.

A lot of wild plants - and even a small tree grow in the mud that has collected in this small strip. There is not much graffiti - which is surprising seeing how accessible the place is. At the top there is a nice round platform with a terrific view of the city and the river.

The platform - What a picnic place 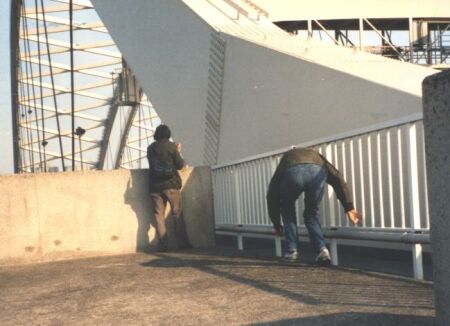 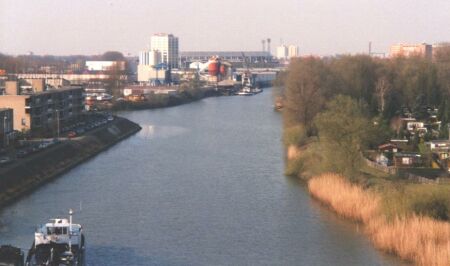 Panoramic view from South Rotterdam to City Center -> scroll to see it all ...

Nighttime view - From this "wrong" side of the bridge you get a great view of the river, of the "Island of Brienenoord" and the skyline. At night it's especially impressive. That's how I discovered it, sometimes in the autumn of 2000.

After a walk of 500 m you reach the arch. It would be a great place for a picnic. Walking further than this point is dangerous because the bridge-operator can see you from his watchtower and he (most likely) will alert the police.

I took this walk at night and I thought I was completely invisible because of the darkness. When I got down again I saw that the sound-screen is translucent and that my silhouette must have been visible for miles around. But people simply don't look up - and when they do, they don't seem to care. 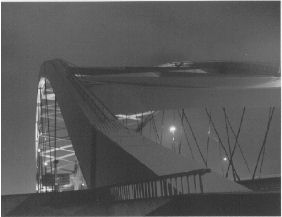 At night this view is amazing

The lightbeam is the Erasmus-bridge that's lit at night - Talking about light pollution - no stars at night here ...

Climbing the arch of the bridge - I haven't done this. You will certainly be caught and prosecuted as the following story demonstrates:

The reality is less adventurous than the story suggests. A convenient walkway runs all along the arch and a solid railing reduces the chance of a fall. If I knew that I could avoid arrest - I would climb the arch without hesitation. Take a look at the opening picture and see for yourself.

From left to right - The power station at Heijplaat (5 chimneys, now demolished), the waste-incinerator plant (with smoke cloud) and the chimneys of the Shell-refinery in Pernis.

From left to right - The Euromast, the office of Van Ommeren, the 1989 building, Powerstation Marconiplein, the Justice-court and the Erasmusbrug.

17/10/98 - In the afternoon Kaspar had invited his friend Max. When I thought they had played computer games too long, I took them outside. We walked over the Brienenoord bridge and watched the ships go by underneath.

The boys (7 and 8 years) enjoyed looking through the cracks into the depths below (it's 65 meter high) and throwing small pebbles over the side of the bridge. But only in places where they couldn't do any harm.

In the middle of the picture you can see Krimpen aan den IJssel and the four towers of the "Algerabrug".

It was spectacular when the bridge had to open to let a Russian ship go through (called "MIR", just like the space station).

Behind the ship you see the inevitable wharf of "Van der Giessen - De Noord". It's on every view in this neighbourhood. It's so large and high that it dominates the landscape.

The west side of the bridge gives you a nice view, but no adventure. It is open for pedestrians and cyclists. The east side is a challenge. There is a narrow path that is not meant to be accessible. But there are no camera's as far as I've seen. You could get on this side by walking 50m along the emergency strip of the southbound highway. It's a project for the future. - Yes, in 1998 it was a project for the future. But now I've been there and it's spectacular. See above ...