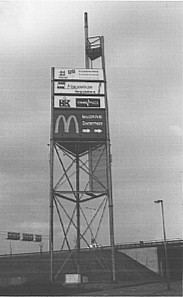 On Saturday 10 October 1998 I met with Dennis and Patrick in Zoetermeer. We had decided to climb the large billboard next to the rails and the car-viaduct.

Patrick has the reassuring habit of saying: "What's the address of this place? If something happens, the portable telephone is in the rucksack ... "

I stayed down all the time but Dennis and Patrick climbed the 6 meters to the bottom of the ladder, then up the ladder to the top (probably 40 meters). My excuse for playing chicken was my lack op rappeling technique. Also I had borrowed my klettersteig-set (for securing ourself on the ladder) to Patrick. So I could not get up safely.

After looking around the inside of the billboard for a while Dennis hung the rope around the railing of one of the inside balconies. Then they rappeled down 35 meters. 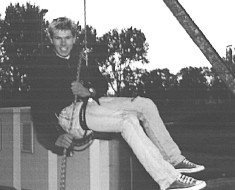 They were both elated when they came down. We packed up our things and went for a cappucino.

The whole adventure was over in 75 minutes. 30 minutes unpacking, preparing and going up. 15 minutes looking around in the billboard. 30 minutes selecting a good place to hang the rope, preparing the rope, abseiling and packing. No one noticed or no one cared. We have to go back, because Patrick had to leave a sling up there. It would be nice to go back and collect it.

We evaluated the billboard-climb and found we had made two errors: