For one hour we explored the buildering routes of Jan. Some of these (on the basalt blocks) are almost too difficult to be pleasant. The holds are small and it is different from the climbing hall: you have to search for the holds yourself, they don't have a different colour. But it's good practice for the fingers. Here Walter tries one of the routes of the "Waterline" climbing area that was developed by Jan van der Meulen. 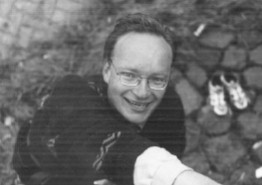 But the crack-routes next to the Willemsbrug are a lot of fun. This is yours truly in the route "First love" with a nice shot of his sneakers and his bald forehead (thanks Walter!). 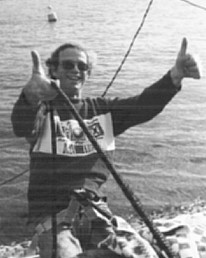 We installed a top-rope (first using a bench and a wastepaper-bin, then a flagpole) and climbed three of the routes. This is Walter on top of "Crack the cracks".

Notice the buoy in the river "Nieuwe Maas". The other rope-like thing behind him is a part of the artwork "De Waslijn" that is hanging between the Willemsbrug and the pylon of the old railway bridge. Also an interesting object to climb, but it is full of bird-shit.

In one of the cracks Walter loosened a large stone (20*20*20 cm) from the quay wall. That was dangerous, it could have fallen on his head, or worse, his fingers could have been sqashed between this stone and the wall. We'll have to inspect the routes better before we climb them next time.

The rope suffered a bit on the sharp stone edges. We protected it by putting a towel and a sweater under it. Next time we'll take some old bits of a carpet with us (a trick I read in a caving-book).

Then we walked over the bridge to the south side of the river. We fastened the rope to the remains of the old railway-bridge and rappelled down several times. We also exercised prusiking up the rope, using "prusik" knots. It worked! Passers by were very sympathetic and friendly. No one criticized us, and several people stopped to watch us. At 17:00 we went home, tired and satisfied.