The bridge over the river Waal was built to replace a ferry that had been in business since 1657. Construction started in 1932. On the 16th of May 1936 the bridge was opened for traffic by queen Wilhelmina.

There are two bridge-heads and four pylons. Each pylon is 27m high, from river-bottom to bridge-floor. That's approximately the height of a 10-floor building.

Sunday 25 April 1999 the four of us climbed the underside of the Waalbrug at Nijmegen. 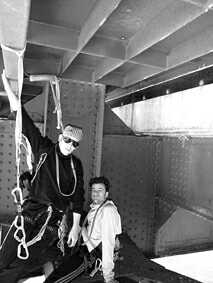 Dennis and me were invited by Mr. Green and Mr. Orange (see the picture). They thought it would be doable with my climbing abilities.

We started at the southern bridgehead and climbed under the two smaller arches and the large arch. In total a distance of 411m, not counting the width of the two pylons we passed (7+6m).

The climb took us 6,5 hours (12:00-18:30). This includes three pauses to eat drink and enjoy the view. It looks slow when you compare it with walking, but it comparable (or faster) than alpine climbing. Walking back on the normal bridge-surface took us only a couple of minutes!

The climb was nowhere more difficult than grade 4. The problem is not the technical difficulty but mental exhaustion. Therefore some pauses are necessary and it is wise to take food and drink with you.

Because the climb passes over a parking lot and over a busy river many people noticed us. Probably this cannot be avoided. The boatmen and the boating tourists waved at us. Maybe they liked what we did.

We had to balance on 10cm wide steel profiles, climb over and under girders, wade through 20cm high pigeon shit, avoid an active radar antenna and picnic in the middle of the bridge with the large boats passing underneath you.

Impressions from the route - bridgehead to first pylon 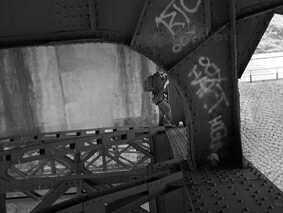 This is yours truly (nicknamed "Blue-Eyes" by Mr. Green and Mr. Orange).

We started by climbing up a 15 meter high steel arch UNSECURED. I didn't really like that, but it was 1 meter wide and the risk was acceptable. Still, I crawled up the last few meters instead of "walking like a man". By that time we were high above the street-lanterns. The others demonstrated that urinating from this height is spectacular. Unfortunately I didn't take a photograph. I was too busy holding on to the arch. 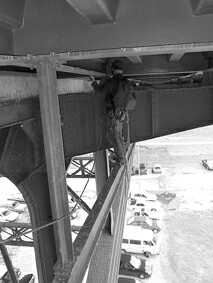 At the top of the arch we stepped over on a horizontal rail. We started using ropes from here so my nerves got a rest. Here I'm finishing the first part of the climb. The picture was taken from the first pylon. 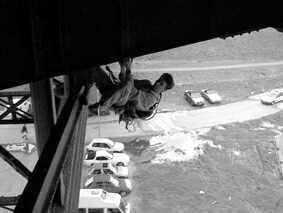 Climbing was quite easy except where you had to pass under one of the girders. Dennis demonstrates the easy way of doing this. The hard way was demonstrated by Mr. Orange, but I have to scan the photo yet. 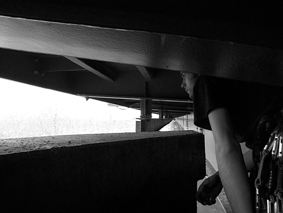 Mr. Orange thinks he has seen the police, but this was a false alarm (at this moment). We took a short break and discussed the handling of the next section.

Pigeon shit was everywhere. Sometimes it was heaped 40cm high. But it was dry and compact, you could stand on it. It crumbled when you touched it (and you had to, a lot of times). Imagine how bad it would have been on a wet day!

In the background you can see the route leading to the second pylon. We walked the edge on the lower right and held on with our hands to the rail on the left. 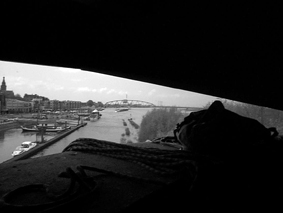 The view from the first pylon. In the foreground ropes, slings and a knapsack. In the background the restaurants of the Waalkade and the rail-bridge.

Mr. Green has tried to climb it but he says it's no fun. When a train passes overhead you are almost shaken from the bridge, the noise is overwhelming and you get metal and dust in your eyes.

Second to third pylon - under the big arch 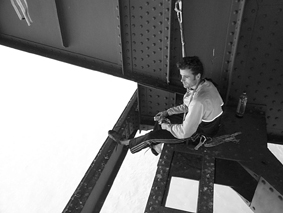 Mr. Orange is enjoying the view after we finished the climb from the first to the second pylon. All pictures were taken by Mr. Green using a digital camera. My pictures have to be scanned yet. 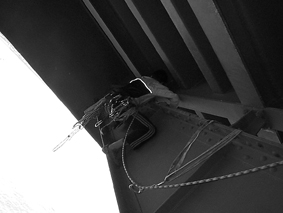 The Orange/Green rope-team was a lot quicker than the Dennis/Petr team. So they had time to explore alternative routes while we were climbing the standard route.

Here Mr. Orange is placing protection while climbing a girder that's perpendicular to the route. He's exploring a way to get onto the surface of the bridge by the direct way. 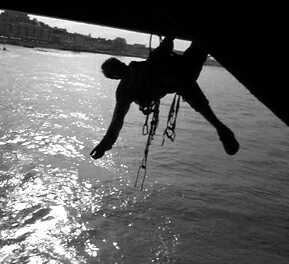 Here Mr. Orange is returning after placing the last protection on the alternative route.

Notice the water 20m beneath him. The current was quite fast and if you stared at the water too long the bridge seemed to move. Probably your sense of balance was disturbed by the conflicting signals from your eyes and your position-sensors. Not a good thing to do when standing on a thin rail. 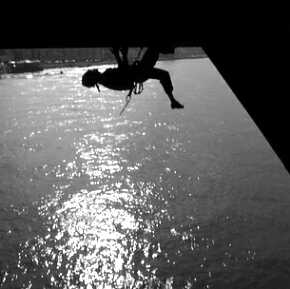 Mr. Green is continuing at the spot where Mr. Orange returned. He found that it would be possible to climb out over the side of the bridge but that it was not esy. In his own words: "The move that follows is not something for beginners. Unless ofcourse you would like to practice a lead-fall at a height of 20 meters."

In the middle of the bridge I and Dennis were a bit low on morale. "How long do we have to go on from here?" The constant repetition of moves (a girder evere 20 meters) and the 100% attention to every act (hanging a sling from a steel plate, clipping into the sling, passing under the girder, clipping into the cable-support, unclipping the sling, hanging the sling around your neck while not dropping it into the river etc.) really took their toll. But a small pause and some chocolate restored our spirits completely. Lack of blood-sugar. We simply forgot how long we had gone without food.

A wonderful and strange loneliness during the whole climb. The trucks were passing 20cm above our heads. We could see the restaurants on the quay below. Boatmen waved at us. And still we were so far from cilvilization. If we got into trouble there was no one who would notice and no one who could save us easily. It was like being in a "deserted island" bubble in the middle of town. Eerie! 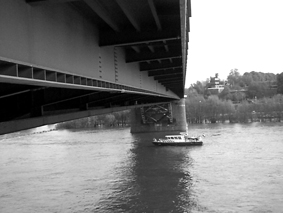 The police-boat also came to take a look. The policemen were good sports. They said that we should have asked permission and that we shouldn't do it again. When we promised to get off the bridge as soon as possible they didn't bother us anymore. Since we were at 75% of the route we simply finished our planned climb and still kept our promise.

The name of the route

Being the first ones to climb the route Mr. Green and Mr. Orange had the right to name the route. They chose "Doc at the Radarstation", after a record of Captain Beefheart. The name was based upon the radar antenna we had to climb over and the painter's gondola that hangs at the other end of the bridge (this was out exit).

Is climbing over the radar dangerous ?

A short discussion on the "underground" and "infiltration" mailing lists showed that it is probably not dangerous but that you have to be careful anuway: