doc at the radar station - part 2

From bridgehead to first pillar 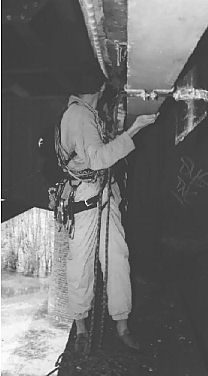 Dennis on his way to the first pillar. 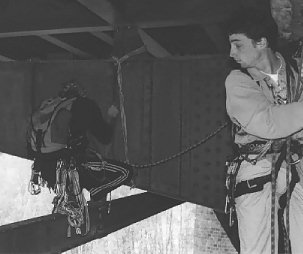 Dennis securing me while looking at Mr Green. 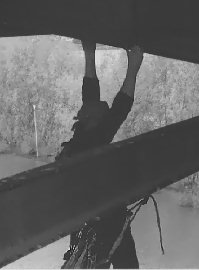 Mr. Green showing off his strong arms. He doesn't stand on anything. It's a spectacular way to pass under the girder. 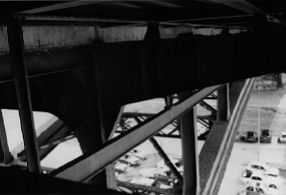 The view from the first pillar down to the parking lot. We arrived here by walking over the horizontal rail and ducking under the girders. 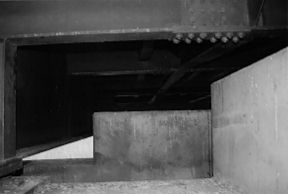 The space under the first pillar. Not much to see there.

But when we got there we were happy with a moment's rest. Here we could stand, look, relax and we were completely invisible.

From first to second pillar 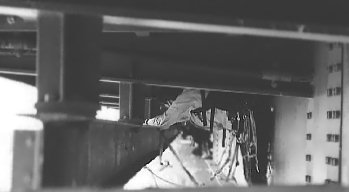 The section from the first to the second pillar was completeley different. Here you could stand on the I-shaped girder while holding the rail with your hands. Mr. Orange leads the way. This was a quick section, because you could secure yourself with a "klettersteig" set, throwing a sling around the rail. 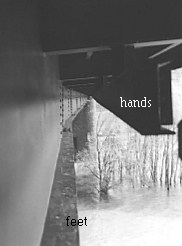 Looking back from the second pillar to the first. Now we were above the deep section of the river. We had left the willow-trees and the crows behind. 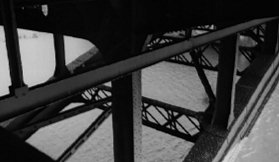 A look from the second pillar down into the water. You can see a lot of unexplored climbing possibilities.

From second to third pillar 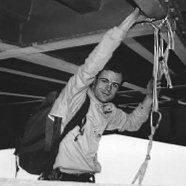 Mr. Orange on his way to the third (and last) pillar.

This was the last, and longest section of the climb. Here the boats were passing under us. There were many places along the way where you could lay down an inflatable matress. Imagine camping and sleeping here. We only had time for a short picnic halfway. A bottle of mineral water, some sandwiches and a Mars-bar. 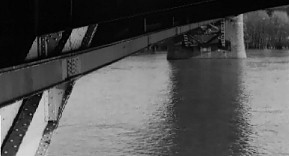 To finish this section we had to climb over the horizontal rail. This was tiring because of the endless repetition of the same movements. 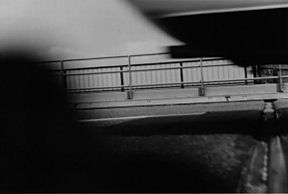 Sometimes I was looking for an easy way out. But there was no easy way to climb onto the road. There were small cracks through which you could see the surface of the road. I could have touched the passing cars. But they were too thin to climb through. Safety and comfort were so near, but so unreachable. 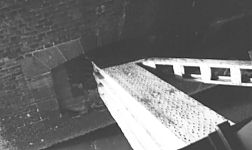 Looking down the third pillar into the water. A wonderful construction. See how the arch is connected to the brickwork. 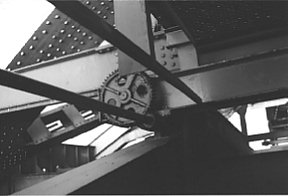 The gondola for the bridge painters was parked next to the third pillar. We exited along this gondola.

The moment of relaxation is a dangerous one. Mr. Green confessed later that he packed up his gear, coiled the rope and leaned against the railing of the gondola. But in this spot there was no railing. He realized this at the last moment. It would have been a bad end of our adventure. 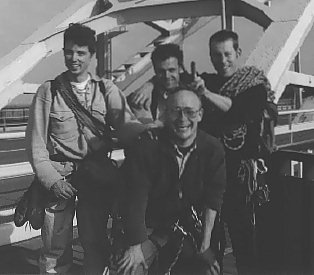 You can see how happy we were to be on solid ground again. No casualties. No wounds. No legal problems. We were happy to take off our tight climbing shoes. Walking the broad and solid asphalt surface was light and easy. 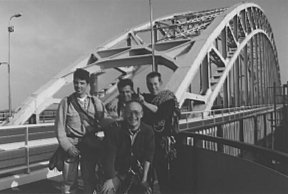 On the right you can just see the ladder leading from the gondola to the surface.

I was very thankful that we could do this. Look how beautiful the bridge is, it's the most beautiful bridge I know in the Netherlands. It was an honour to climb it.