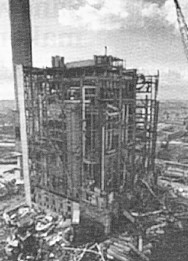 The 32 year old power station in Dordrecht (Centrale Merwedehaven) is owned by the South Holland Power Company (Energiebedrijf Zuid Holland). It is being demolished by an Amsterdam firm (Sloop Combinatie Amsterdam). During this process the debris is sorted and recycled if possible. For example 12.000 tons of metal will be recycled. 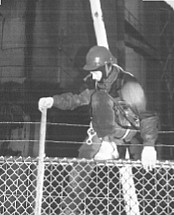 The area is guarded by vicious watchdogs and watchmen. To make entry possible Jan van der Meulen had to distract the dogs on one side of the terrain, so that the climbers could scale the fence on the other side.

The sign you see is one of the standard Dutch signs saying: "Entrance Forbidden, Article 461 of the penal code". I looked it up in the lawbooks, it means you can be fined NLG 500,- and your materials can be confiscated (?).

The left side of the sign looks crumpled. This is because the dogs were so angry that they started biting this sign when they couldn't get at Jan. In the colour pictures you can see spots of dog-blood on the sign. Later the dogs calmed down and became interested in the meat at the end of the stick. 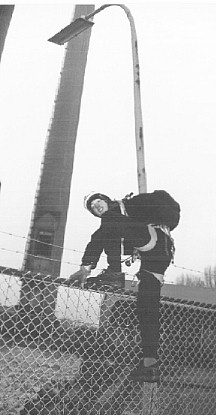 The climbers were Paul Schot (19) from Zwolle and Simon Wulffraat (19) from Lelystad. During preparation and planning they studied the site extensively. They used binoculars to get a close-up view (they couldn't enter the area because of the dogs). And they took a lot of photographs and made many sketches of the situation.

They had planned to climb up by the lightning rod (7-10mm thick, like a ballpoint). This rod was fixed to the chimney by bolts, every 20 cm. They put rope slings (4mm/dyneema) around the bolts and used these for belay. This held one risk: the bolts sometimes had sharp edges and these might cut the slings if a fall occured. On one rope length they used up to 45 of these slings.

They intended to use an electric drill to drill hooks in the chimney for relay-points (for extra security, this avoids the bolts with the sharp edges). But the batteries proved too weak and they used the lightning rod all the way up.

After climbing the fence they climbed the lightning rod to get to a safe height where they couldn't be caught by the watchman and the police (this is always a good tactic: get out of reach quickly).

In the meantime they had been spotted by the watchman. "They get one more chance to climb down now" he said, "otherwise I'll call the police". But the climbers decided to risk the fine; the adventure was worth it.

From their exploration they knew that the top balcony was reachable by a thin crack under the balcony floor. They took several "camalot junior" with them to scale this crack. Their only fear was the lightning rod. If it got too close to the wall of the chimney the wouldn't be able to continue the climb. But all worked out well ...

... and they reached the top at 125 meters. Rappelling down was quick and easy. At 16:00 they were down on solid ground again.

Afterwards they called the demolition company and tried to let them see the humour of this action. This was not succesful. The manager finished the communication in a gruff way and hung up the phone. The company threatened them with a fine. But the haven't heard from them since, so possibly they will receive no punishment at all for their adventure.

That's why the length of an ascent is usually measured in rope-lengths. This climb took three rope-lengths to finish. But in this case Paul (being the more experienced climber) climbed first on all the rope lengths. Simon used jumars (rope clamps) to follow.