But of course some people have climbed them anyway ...

For some people they are attractive targets. Even for "normal" people. I've asked around in my circle of acquaintances and see what I got:

It seems that people grow out of this as they get older. Usually they turn to other nerve-wrecking activities. My choir-colleague became a professional photographer. And my boss became a network manager.

And some people have even taken pictures ...

The brother of a colleague of mine has climbed transmission line towers and building cranes. I exchanged some short e-mails with him and talked to him over the phone. He acted as if it wasn't such a big deal. Let me quote him: 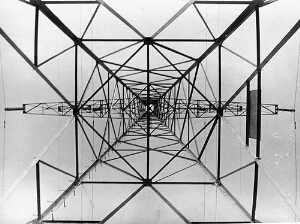 Looking up at the 110kV transmission line tower near Geleen. On the right you see the backside of a small sign. Usually these say "Mortal danger".

Looking from the side. The small arrows and the numbers show the different viewing directions. You can recognize them in the following pictures. Also notice the spikes along one of the corners leading all the way up. 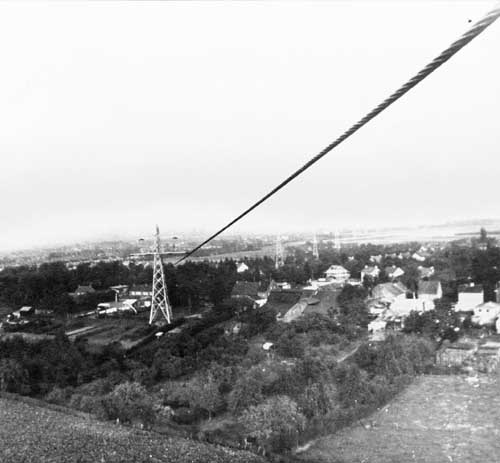 Looking at the next mast form the top (view number 4). The wire you see is the top (zero, lightning-conductor) cable. You also get a nice view of the undulating countryside around Geleen. It's in Limburg, the southernmost province of The Netherlands.

Looking down from the center (view number 1). You can barely see Ed's brother Ton and his bicycle standing in the grass below. Ed was 18 at the time and Ton was 16. Their mother didn't really approve these activities. 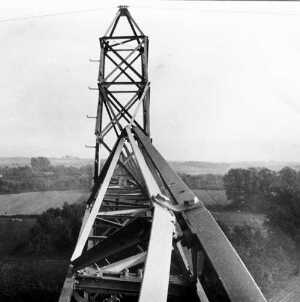 Looking towards the center from the end of the top boom (view number 3). Notice the spikes again. 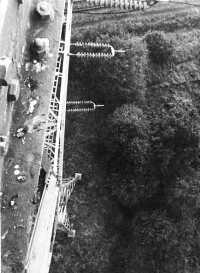 And finally a look down along the center. It really is high!

What are the dangers ?

The official advice of the electricity company is: DON'T CLIMB THEM. But I wanted a more specific decription of the dangers and I visited the library of the Ministry of Social Affairs. This library has a lot of safety literature. I give you a quick overview of what I found. I cannot guarantee the accuracy however! Correct me if I'm wrong please. The firemen's and policemen's guidelines say: Stay away from live wires. Keep a minimum distance of 5 to 10 meters. But even more detailed instructions exist.

The "basic-distance" is the theoretical safe distance from a live wire. However if you're climbing or working in a transmission tower you cannot control your distance from the wires very precisely. Also the tower and the wires are swinging in the wind.

So in these situations you have to maintain the minimal "boundary distance" from the wires. If you have tools in your hands or if you carry things you have to look out for the extra "reach" this gives you - and for the added exposure.

If you climb up using a ladder you should not add just 1 m to the "basic distance", but 1 ,35 meters. If you use the spikes ("klimpennen") you have to add 1,60 m. So then the boundary distance is even larger than indicated in the table below.

You don't notice that you're too close until it's too late.

People have got killed even by touching cables that were NOT carrying current. However the current in neighboring cables produced an induction current in the unused cable. These induction voltages can get as high as 10 kV. High enough to kill.

Less people get killed by electrocution than by falling from the tower. The towers can be anywhere between 40 m to 160 m high. Falls are caused by mis-stepping, slipping, tripping over something, becoming sick, getting a non-lethal electric shock, being hit by a dropped object. The conclusion is that you have to be secured to the tower at any time. You have to be secured if you work higher than 2,5 meters.

Most of the lethal accidents occur on the descent from the tower. Several "human factors" combine to increase the danger:

BTW: This also applies to rock-climbing and alpine climbing.

People over 40 years of age suffer significantly less accidents than younger people. Are they more careful? Or do they move to less risky jobs? There is not enough data to support either hypothesis.

Proximity-detectors for "life" power-cables exist but they cannot tell you if you'e still within a safe distance from a cable.