On the 30th of December I called Walter and found out he had bought new gear: 20m of dynamic climbing rope and three "quickdraws". Not much, but enough to have some fun. So we went billboard-climbing at the "Brainpark" (near the metro-station Kralingsezoom). 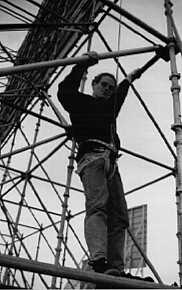 The first one was 15m high and built from round steel tubing. It was very easy to climb and to secure. It is easily recognizable because it has a large face of Albert Einstein on the front side. 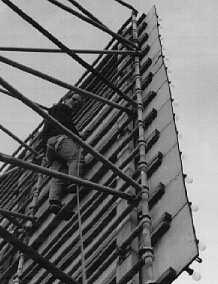 Climing up was just as easy as climbing a ladder. Notice the fancy christmas lights around the edge of the billboard. Enough to supply you with lightbulbs for several years.

But looking down made you realize you had to be careful anyway. Especially because our rope was too short to do the whole stretch on top-rope.

The view from the top. You can see the highway leading to the Brienenoord-bridge. The highest building in the picture is Hotel Novotel.

On the left (in the distance) there are two billboards.

The large billboard on the right ("Bouwfonds") is made from 9x17cm wooden beams. All our attempts to climb it failed. We tried climbing on top of the beams, under the beams, we tried prussiks, we tried throwing the rope over the beams etc. The slanting wooden beams were simply to steep and too smooth.

The fifth and sixth billboards (not in the picture ) were just like the previous one, so we skipped them. The seventh billboard was behind a fence and didn't seem worth the trouble.

So the score after a hard battle is 6:1 for the billboards. In June 99, they were still there waiting to be conquered. And in 2000 the were removed. Alas!