The unprofessional first attempt - I don't think much text is necessary

Tuesday 8 August 2000 - Ben and I explored the Rotterdam United (formerly Wilton-Feyenoord) shipyard. In an old deserted part of this shipyard I found 20m of old hemp (I think) rope. It was 4cm thick! I tried using it for rope-walking, but it was too heavy. The vibrations of the rope kept throwing me off.

So I decided to hang it across a ditch behind my house and use it as a rope-bridge. Of course I had no idea of the proper technique. And the rope was far worse than I had thought - while pulling it tight we managed to break it! It was too old. So I made a knot in the middle and trversed it anyway. My wife and son watched the attempt. My son was taking the pictures and he was disappointed that I didn't fall into the water.

Sunday 11 March 2001 - I decided to fulfil one of the tasks of my year-plan and to build a rope bridge. You need two people to build a rope bridge, and my son was willing to help. I had bought an extra 20m rope and a set of aluminium and steel rings. And I had all my climbing gear. The only problem was the weather, which promised rain any minute.

With a throwline we pulled the ropes over the water and managed to keep them dry and clean (at first). I use the same technique that I use for setting up a slackrope: 1) tie the rope around one tree, 2) pull it over to the other tree and make a "garda knot" using two carabiners and a sling, 3) tighten the rope using an improvised system of pulleys.

The pulleys multiply the force you can apply to the rope and the knot allows the rope to pass through in one direction but it blocks in the other. This is an ideal system to set up a rope and tighten it. It is a major headache to get it down again as all the knots bite into the rope and are almost impossible to untie. 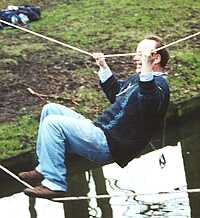 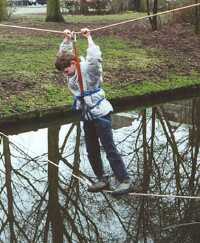 Father and son - it's all in the family

We installed two ropes above each other, one for the hands and the other for the feet. With my slackrope practice it was surprisingly easy to walk from one side of the water to the other. My son found it too wobbly and he dared to cross only after I improvised a harness from slings and clipped him to the top-line. But once he was safe he became very brave and found out that a tight-rope makes a nice trampoline. 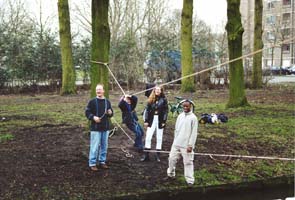 Can we play with you ?

The whole exercise was watched by the Sunday strollers and a young, neatly dressed couple asked if they could try the bridge. Then I became really nervous. If something broke they wouldn't drown, the stagnant ditch behind our apartment building is only 1 meter deep, but it hides a 50 cm deep layer of black stinking mud. I wouldn't know where to look if they emerged with their Sunday clothes blackened up to the waist. But they crossed several times unharmed, although the lady with her thick soled shoes came close to falling off. 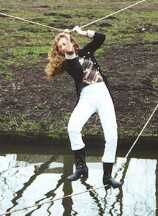 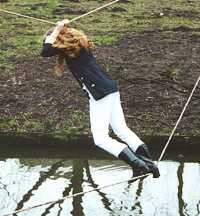 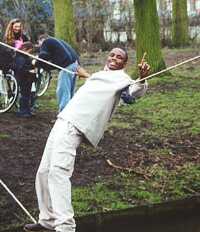 Various states of balance and imbalance

Even their 6-year old daughter made the crossing. Her parents first wouldn't allow it, but the little girl insisted. So again I made an improvised harness and let her loose on the ropes. As expected she got stuck in the middle and had to be rescued by me. This only added to the fun and it proved that the construction can hold at least 100 kg (80+20), no problem. 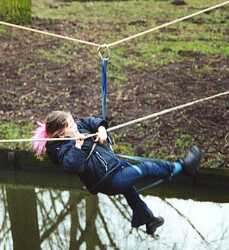 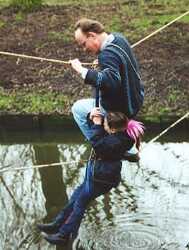 As expected untying was a big problem. I had to take the force off the knots by constructing a parallel set-up of even stronger pulleys and even then there were times when I feared I would have to cut the sling around the tree. I had to do that before and it's humiliating. If anyone knows some better solution it will be appreciated.

During the setup of the pulley I needed one more carabiner so I shouted to my son at the other side "Throw me a biner!". He hesitated and asked "Won't you be angry if it falls into the water?" I promised. He threw and the carabiner disappeared in the middle of the ditch. (My son plays basketball and even scores points, so he knows how to throw. But later I tried it myself and found out that it's not easy to throw a 400g carabiner 25 meters far. The grip is awkward. Try it yourself ...) 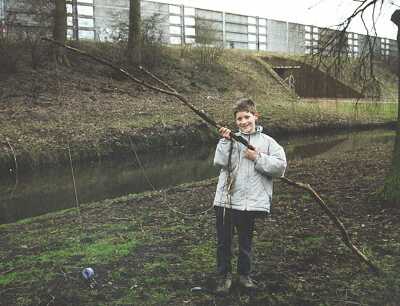 Most unusual fishing gear - the blue donut is the magnet

This spoiled the fun a bit. But I remembered two strong magnets that were stored in the kitchen drawers. I had never used them. We tied them to a branch and began fishing. I felt quite stupid, fishing in a ditch with a magnet tied to a branch - that's something out of a Nintendo-game, not something to be taken seriously. But we caught and beached the carabiner sooner than expected. How lucky I was that my son picked one of the steel biners, an aluminium one would have been lost forever.

This weekend I had to wash the rope. It was muddy from all those feet. I used "luke warm water and soft soap", just like the mountaineering book says. It came out like new!

Did you build rope bridges when you were a kid ? Did you ever fall from one ? Mail me at (obfuscated) kazil a.t euronet d.o.t nl