LAST CHANCE, BUT PERMISION DENIED - While driving to college on my bike I noticed a large crane along the tower of the Lambertus-church in Kralingen. The church-roof and spire are being renovated and on this day (Friday 2 July 1999) they were installing the cross at the top of the spire. I asked for permission to climb up, but the workmen were too busy. However they told me the scaffolding would be removed the week afterwards. So I knew I had to hurry.

PERMISSION GRANTED - After college at 16:00 I drove by the church and saw two other workmen doing some paperwork in their car. They were about to leave. I asked for permission to take pictures of the view. They said that probably no one would bother me if I climbed the scaffolding. I drove home immediately and picked up my camera and climbing gear.

TERRIFIC VIEW - I climbed almost to the top of the spire, up 25 ladders. Later I calculated I must have been 50m high, that's 17 floors! It was a hot day, but at the top a cool wind was blowing. The view was wonderful. I could see the Kralingseplas on one side and all the Rotterdam bridges on the other side. 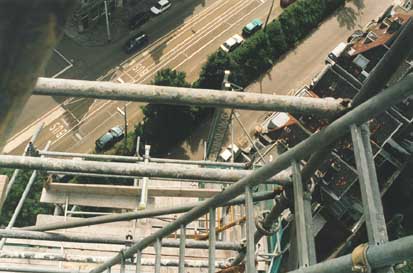 On the left you're looking north-east along the Hoflaan. Notice the tower of the Hoflaankerk. (The inside of that tower is on my website too! It's in the "strange places" section.) In the distance you can see the artificial lake - Kralingseplas - and the appartment buildings in Ommoord at the horizon.

On the right you're looking straight down into the Oostzeedijk and Oostzeedijk-Beneden. 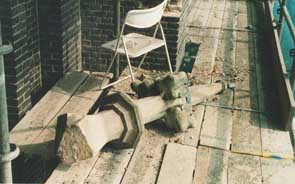 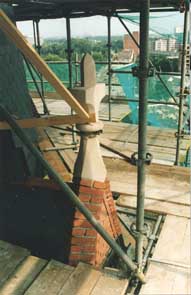 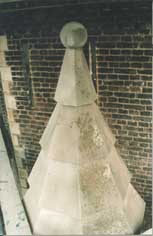 Spires of all sizes and in all states of (dis-) repair

Other sights - On the way down I had time to enjoy the view and explore the interesting features of the tower. I saw:

NEVERMORE - Indeed the scaffolding was removed next week. So now I have a set of unique, irreproducible pictures. The lesson is: always take a chance the moment it occurs, you may never get a second one.