Sunday 21 October we were invited for a psychogeographic walk through Rotterdam. It was organised by Wilfried Houjebek (this alias translates into Wilfried "Keep-your-bloody-mouth-shut"). At 15:30 the crowd of 10 psychogeographers was split in 5 two-man teams and each team was handed a description of the route.

We were supposed to follow these instructions and repeat the sequence over and over again. "We all start in this direction, and we will be back here at 17:00", Wilfried pointed down the Witte-de-Withstreet towards the West. We have to turn left immediately. Ben's group heads right, and Tomas' group continues straight on. Wilfried had handed every team a different "algorithm".

Detour - what is psychogeography ? (skip this paragraph to read the rest of the expo)

The word psychogeography was coined by the situationist poet Guy Debord around 1950. It describes the study of the precise laws and specific effects of the geographical environment, whether consciously organised or not, on the emotions and behaviour of individuals.

The sudden change of ambience in a street within the space of a few meters; the evident division of a city into zones of distinct psychic atmospheres; the path of least resistance which is automatically followed in aimless strolls (and which has no relation to the physical contour of the ground); the appealing or repelling character of certain places - these phenomena all fall into the field of psychogeography.

One of the basic situationist practices is the dérive [literally: "drifting"], a technique of rapid passage through varied ambiences. Dérives involve playful-constructive behaviour and awareness of psychogeographical effects, and are thus quite different from the classic notions of journey or stroll.

In a dérive one or more persons during a certain period drop their relations, their work and leisure activities, and all their other usual motives for movement and action, and let themselves be drawn by the attractions of the terrain and the encounters they find there. Chance is a less important factor in this activity than one might think: from a dérive point of view cities have psychogeographical contours, with constant currents, fixed points and vortexes that strongly discourage entry into or exit from certain zones.

For further details on psychogeographic theory and practice see:

First left - Unnamed alley into parking place (yes, we had been here before)

Second right - Vredesteinlaan (yes, we had been here before) 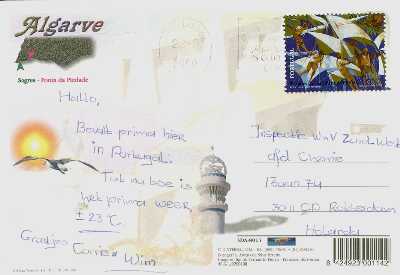 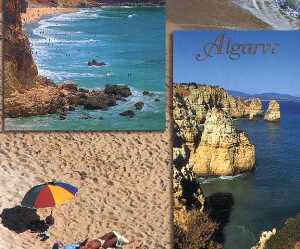 Inspectie W&V Zuidwest, Afdeling Chemie, Baan 74, 3011 CD, Rotterdam - Corrie and Wim have a nice time in Portugal. Weather is fine and it's 23 degrees Celsius. This is somewhat personal, but still innocent information. 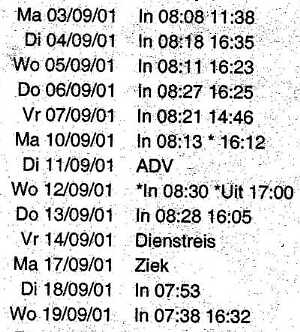 It gets worse when we find the time sheet of one employee - whose name I know, but I won't publish it. It states the times when he came to the office, left office, was on business travel, had a day off, or was ill. The asterisks show when he forgot to register the time. 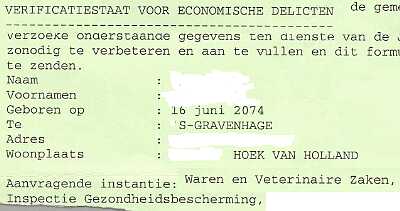 But this is a real shame. Here I have all the personal data of one of the clients, who may be suspected of some unhygienic crime or financial fraud. I have removed all the personal data but one. If you look at the birth-date you will see that they still have a Y2K problem in their computer systems.

On the way back - Westersingel

All the teams met at 17:00. We compared our routes. One team had been going round in circles. Another team zigzagged out of the centre and ended up on the other side of the river. They had to take a streetcar to get back. Everyone enjoyed the experience and everyone was surprised about the discoveries that we had made:

It felt like we had walked an unknown city.

Personally I found this algorithmic drift a huge success. I never expected that an ordinary walk could feel so adventurous.

I thought I knew the area but I discovered a lot of new things. Without the algorithm I would never have taken such a circuitous route and would have missed a lot of details. And a two-person teams intensifies the experience. Each team-member notices different things and it's interesting to share the impressions.

It would be interesting to repeat the expedition in a really boring and monotonous part of town. Would it become more exciting?

Analysis of the algorithm

On an ideal grid the walker would go round in circles. But in a "random" grid the walker will follow a more curved path. I haven't tried to prove that every combination of left and right will lead to repeating routes, but I think it's likely. Maybe there is some fancy mathematics involved - maybe random walks or group-theory ? 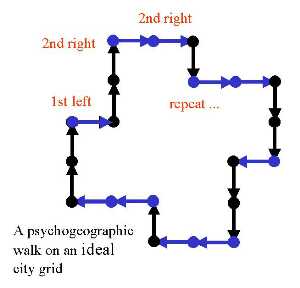 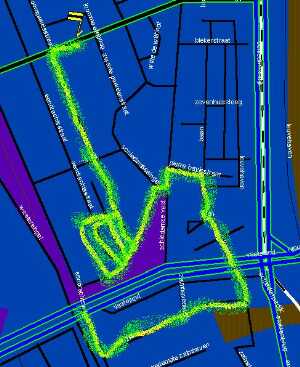 The algorithmic drift in theory and in practice. The flag is the starting point.

I have formulated the following conjectures:

I have found an elegant proof of all these conjectures but there is not enough space on this webpage to describe them fully them.

Back to: Urban Adventure Home