The PTT-building in the Hoogstraat
7 August 1983 - Without permission

On Saturday morning (market-day) Peter and Jan were measuring and sawing blocks of wood in the street while bemused saturday-shoppers watched them.

At midday they were ready with their carpentry. Then they proceeded to climb the first four meters of the corner-profile of the building. This led them to a small roof and gave them some minutes to prepare for the rest of the climb.

Jan climbed 3 meters higher and built a first fixed point using wooden blocks that he jammed in the concrete corner-profile using a heavy hammer. Peter climbed further upwards, carrying 12 kg of blocks attached to his climbing harness. By this time a large crowd of onlookers had formed. Jan and Peter had intentionally chosen the corner that gave the best view. 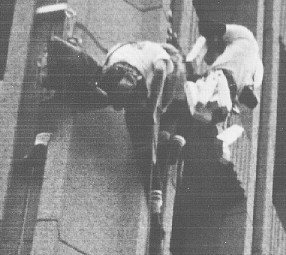 While trying to get a good hold on his hammer Peter dropped one of the blocks. But Jan was able to catch it in flight. It would have been disastrous if one of the onlookers had been injured. In the meantime the police had arrived (much quicker than during the church-tower-climb). The police cordonned off an area around the corner of the building. They were also aware of the risk of falling objects.

After making a second belay-point Peter got caught in the twin-ropes that they were using. Jan took over the next rope-length. However Jan was suffering from a severe throat infection and was not fit. At this moment he doubted if he could finish the 60 meters to the top. Because of the small mishaps and problems during the climb both Jan and Peter had got very nervous. By now the crowd had grown to several hundred people and this increased the psychological tension of their situation.

Three meters higher Jan could go no higher anymore. It even felt as if he was being pulled down! Below him Peter cried: "The police has got the red rope!" Jan was still able to make a next fixed point and Peter decided to climb on using only the blue rope. 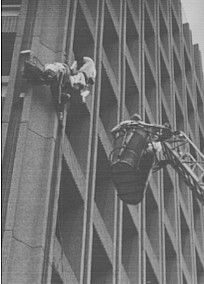 By now the police had borrowed a ladder-truck from the fire-brigade. On top of the ladder was a metal box containing two policemen. First they very quite abrupt and even threatened to cut the ropes but after some discussion they calmed down and even offered Jan and Peter one of their own cigarettes. The climbers now had to end their action. They refused to descend via the ladder and climbed down in the same way they had gone up. The height they had reached was 30-40 meters. Not the top. They gave the hammer to the policemen and asked them to remove the wooden blocks they had hammered into the profile.

This time they were asked to come along to the police-station. Here they were told that they were acting against the law although the policemen were not sure which law exactly. When Jan and Peter left the police station they were awaited by a small crowd of photographers, camera-men and fans.

The building is made of prefabricated concrete elements. They are made of rough, grey, concrete. The corner has a complex profile thet makes it suitable for a vertical climb. By holding on to the inner edge of the profile with your hands and pushing against the outer edge with your feet you get a stable, but tiring, position. 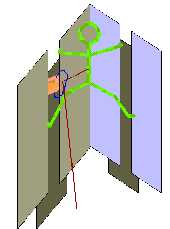 For the belay-points Jan used blocks of wood that were slightly longer than the inside of the profile. Using a mountaineer's hammer they could be jammed into the omega-shaped ridge in the profile. Then a sling could be hanged around the block of wood. The rest is standard technique: clip a carabiner into the sling and put the rope through it. Jan made a fixed-point every 5 meters or so.

The whole supply of blocks was carried on the material-straps of his climbing harness. To prevent the blocks from falling on the heads of the onlookers Jan used a long rubber band that hung over his shoulder. This was safe, but made it difficult to place a block. First he had to unclip the block from his harness and clip it into the rubber band. Then he had to hammer it into position. Then he had to take the rubber band out. Only then could he put in the carabiner and fasten his rope.

They used a double rope, red and blue. The only reason wat thet they could rappel-down simultaneously (no sfaty-reasons), and this they found more spectacular.