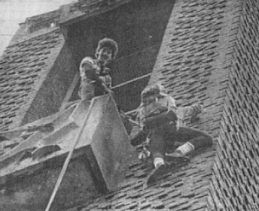 The tower of the church "De Steiger" (on the Hang) in the center of Rotterdam is 45 meters high. Jan van der Meulen climbed this tower on 19 May 1983 together with Peter Mosch. It was a birthday present from Jan.

By coincidence it is the same church that Jan frequented in his youth, together with his parents. But this has no relation with the climbing story.

Jan and Peter had invited the press and the video-team from the Erasmus University. They intended to have a lot fun and to protest against the lack of climbing facilities in Rotterdam.

Jan climbed the tower as the first member of the rope-team. Using one of the corners of the (square) tower he climbed the first 30m. Because this got monotonous he traversed 2 meters to the right under one of the square "windows" where the church-bells were hanging. There he found that he could not get in, because this window was covered by a strong metal grid to keep the pigeons out. Here Jan secured himself and called Peter to follow him up. 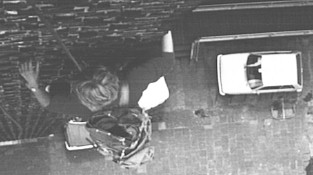 When he got this high, he was spotted by two Rotterdam police-men. "What is happening here?" they asked the camera-men. "We don't know, we were just passing by" they answered. By this time a large crowd of onlookers, policemen and several priests had formed.

When Jan wanted to start the climb of the last 10 meters to the roof a hatch opened in the space under the church-bells and a policeman climbed out.

Fortunately he could not get at Jan and Peter because he was on the wrong side of the metal grid. Jan knew that there was a hatch that lead onto the roof so he started to climb quickly to get on the roof. There he wanted to sit on top of the roof-hatch so the policeman could not get at them. This would give Peter the opportunity to finish his climb undisturbed.

When Peter passed the metal grid of the bell-tower he started a chat with the (caught) policeman to give Jan enough time to climb upon the roof of the tower. The policeman asked for Jan's name and Peter said: "I don't know who he is. I have met him in the pub yesterday." Then the policeman decided to climb down and to wait for them at the base of the tower.

At the top of the tower (a plateau of 4x4 meters) they put on their rollerskates. Using these they rappelled simultaneously down to street level.

First they spoke with the journalists and then with the policemen. To their surprise they were not arrested and were not taken to the police-station. They only got a parking ticket, because their parking time had expired.

They vere pleasantly surprised when their climb was published in the papers, with a nice large picture. As a result of the publicity their parking ticket was remitted. Jan says that his experience with the police is usually positive. The Rotterdam police takes a humorous view of his actions.

The church "De Steiger" is a modern church. The wall of the tower is made of bricks that are laid in a special pattern. This means that every 30cm you find a brick that sticks out 3 cm and a brick that leaves a hole of 3 cm. This makes it easy to climb (approximately 5a). 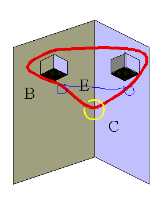 The challenge is how to secure yourself. Jan found the following solution: You put a rope-sling (B) around two of the protruding bricks in the corner of the tower. Then you can clip a carabiner (C) in this sling. This arrangement can hold a downward load very well. To keep the sling from slipping off it is put under tension by a rubber band (E). Still Jan says: "I would not like to fall on it, it is more a psychological aid than a real security aid."

Jan used twin ropes on this climb, red and blue. This way they could rappell down simultaneously.

The climb was described in two newspapers: