The office building of "Nationale Nederlanden"

Jan put on a builder's helmet and a leather tool-belt with his battery-powered drill. In this disguise he explored the building site.

Jan bought the rope at the "Touwhuis", a nice old-fashioned shop at the Goudsesingel that only sells rope and rope-related stuff. For this abseil Jan had to buy 200 meters of 9mm static rope, a whole roll of it! He had to stow it carefully to make it fit the speleo-backpack that Jan used - these are smaller than normal backpacks.

"It is a pleasant feeling to unroll this length of rope and put it in your backpack. Rope is always nice to handle."

"The way you stow the rope is very important. You start by making a knot in one end. Then you take care that this end sticks out over the edge of the backpack and you stow the rope in like a harmonica. You make a knot in the other end and let this end also stick over the edge. That way you can find, handle and attach both the ends quickly. You should avoid losing one end at the bottom of the backpack. " 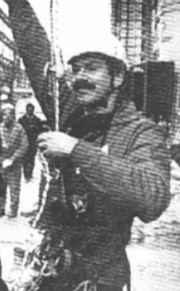 Jan used Petzl gear for the abseil. A bar-rack for more controlled braking and a shunt for extra security. He also used gloves, because a thinner rope absorbs less energy and heats up the metal gear more.

Jan attached a video-camera to a tent-pole and attached the bottom of the pole to his back. To keep the pole upright (and to keep the camera positioned above his head) he put metal rings on the pole and let the rope slide through these rings.

At 6:00 they forced open one of the gates to the building site. Jan had taken two friends with him, one filmed the action on video and the other one made photographs. They climbed with Jan all the way up.

They could take the stairs to the sixth floor. From there they could look up 100 meters into an empty elevator shaft. Just like in the WTC-abseil they had to go outside and climb the well-protected cage-ladder of the building crane. You had to be careful not to make a lot of noise with all the tinkling carabiners that were hanging from the climbing harness.

At 150 meters they reached the cabin of the crane operator. They were surprised to discover that the cabin was kept at a pleasant temperature by an electric heater. There was also a anemometer in the cabin that showed a wind-speed of almost 7 beaufort.

"The wind speed at this height is surprising. At ground level there is no wind, so you're not prepared for the wind-speeds that you encounter at 100 meters or higher. It was February. Later we calculated that the temperature including wind-chill was -10 to -15 degrees centigrade."

At 9:30 Jan attached the rope to the crane and started the abseil. Surprisingly he didn't use the standard figure-eight knot to attach the rope.

"I used a clove hitch to attach the rope. This knot is very strong and it takes less time. If I wasn't in a hurry I would use a figure eight."

The rope was tied around a round beam of the crane. At one point it passed a sharp edge. Here Jan protected the rope by running it through a nylon-reinforced plastic tube - you can buy this at the hardware store. It is important to tie the tube to the rope, so that it cannot slide down.

Because of the cold and the wind Jan's fingers were very cold after seting up the rope, the rope-protection and his video-camera. This took only 5 minutes, but his fingers and hands were stiff already. So he knew he had to get down quickly.

He was not concerned for the anchor point this time, because his two friends could talk to the police and explain the situation. Also he had learned that the policemen are not eager to take risks - they will not climb after you. 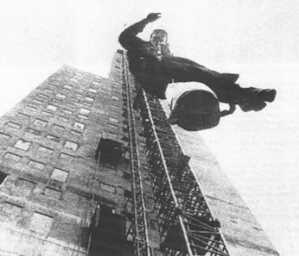 What makes this abseil so special is the height that Jan attained. Now that the building crane is gone, the highest (attainable, artificial) point in the Netherlands is gone. So for some time Jan's record will not be beaten.

When Jan had abseiled to a few floors above the ground he met a group of poicemen that were ascending using the temporary building-elevator. They were a bit angry and were shouting at him. Jan didn't know that they had been shouting at him for some time through a bullhorn. Things like: "Here's the police, come down immediately." But he was so high and the wind was so loud that he didn't hear them at all.

Jan: "Please stay calm officers, you know me, you've always been very understanding."
Police: "Come down immediately."
Jan: "I have to go down slowly, or I'll burn the rope."

At 3-4 meters Jan stopped his descent and made photographs of the policemen. They didn't think this was funny.

Jan performed this abseil to celebrate the 650th anniversary of the city of Rotterdam. The connection with other celebrations assured him of extra media attention. In fact, Jan's action was the first special event to commemorate this jubilee.

The following articles appeared in the papers: