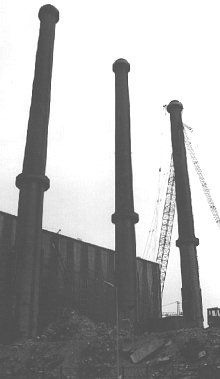 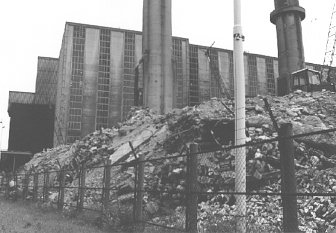 My first sight of the power-station - It still had it's chimneys at that time.

I discovered this place with the beautiful chimneys in the summer of 1999. As far as I know it was a coal-powered (oil-powered ?) electricity generating plant. By the time I discovered it they were demolishing the chimneys. The whole area was protected by a fence and barbed wire. At night a watchman sat in the office. I didn't dare to infiltrate on my own, so I just sat longingly outside the fence.

17 July 1999 I visited this place with Morene Dekker, a journalist from Amsterdam. We didn't climb the fence, but we climbed a steel cable bridge over the road. It ended abruptly above the fence and we would have to rappel down to get inside the power station. But we discovered the oil-tanks that belonged to the power-station and the oil-pumping station. This was fun to explore too.

Another look at the building - read this comment from an inhabitant ... 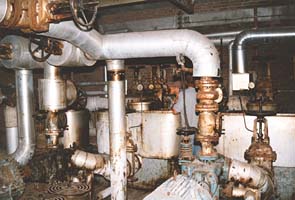 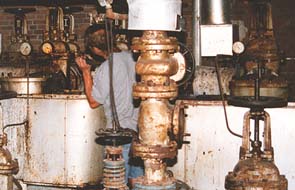 18 July 1999 Walter and I were in the same area. First we climbed a stack of containers that was 18 meters high. Afterwards we explored the oil-tanks, pumps and the cable-bridge. Movement between the pipes made me jump. Were we discovered? Fortunately it was just a local cat between the weeds. 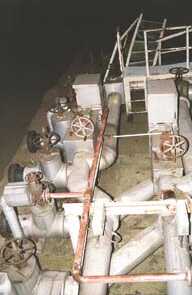 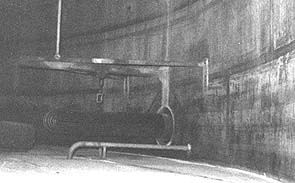 The pipe-network between the oil-tanks - Inside an oil-tank, probably it's a heater.

The demolishing-crew had cut holes in all the pipes and had opened all the oil-tanks. Probably they were trying to get rid of the oil-fumes before selling the scrap-metal. I took a look inside one of the tanks, but the smell was overpowering. Imagine what atmosphere the tanker-cleaners must work in!

View from the oil-tanks - Looking north.

We climbed the rusty stairs to the top of several oil tanks. The sun had been shining on the metal all day, and now the steel was contracting and making rumbling noises. The view from the top was wonderful. We spent a lot of time looking around. We drank a bottle of cold "Fristi", a strawberry-yoghurt drink for children. But real men like us are not ashamed to drink this magic potion! Then Walter reminded me that I was on holiday, but that he had to work the next day. 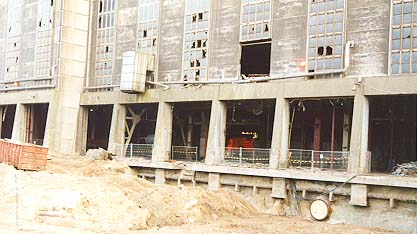 Backside, now without a fence.

22 June 2000 - At 20:00 I collected Ben from the train station, picked up Walters at his home (and admired his new cats) and we drove to the metro tunnels. At Heyplaat we made a detour to show Ben the old power station. This was a lucky move. I had visited this site the previous year and then the station was fenced off and there were night-guards at the place. Now all the fences were open. The site had been bought by the demolition-company from next-door. We asked for permission to go inside and we were advised to keep some distance. There had been a lot of asbestos in the building and although everything had been removed you never could know ... 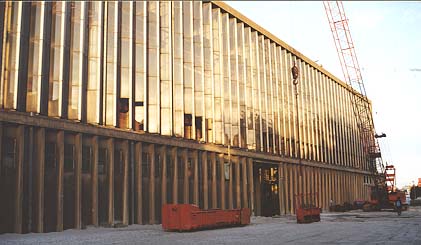 We entered the site anyway and saw a space like a modern cathedral. High, wide, deep and with a lot of pillars. There even were some small stained-glass windows! The last rays of the setting sun shone inside and made the space incredibly romantic. Broken wires were hanging from the walls. Old dials were hanging from the pillars, it looked like several floors had been broken away. 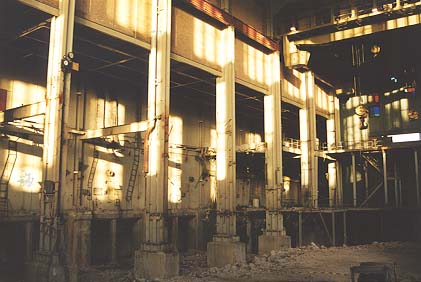 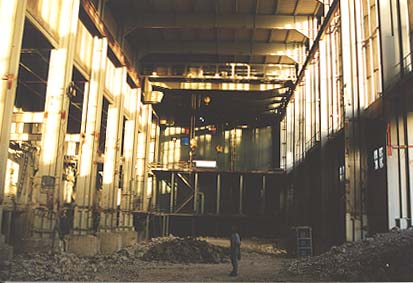 Ben found stairs leading to the roof and went up but I preferred to get out quickly. Outside I saw dinosaur-like demolition machines and I discovered two very deep pits, at least 10m, ideally suited for hiding a corpse. One had ladders leading into it, it's a pity I didn't climb down and take some pictures. 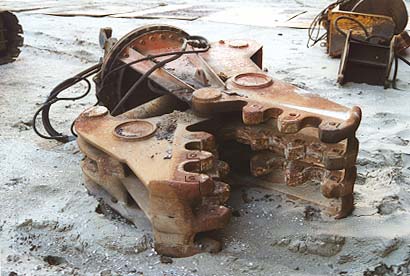 The jaws that chewed up the chimneys.

At the moment (March 2001) the situation looks stable. Not much has been demolished. Not much has been restored. The roof is still accessible. We are not the only ones to visit this place. When I visited the place with my son two other explorers were deep inside the building. 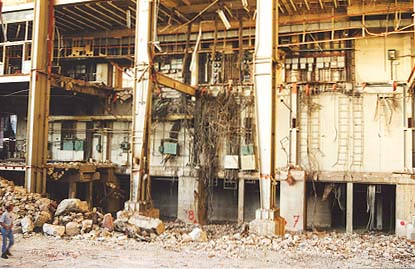 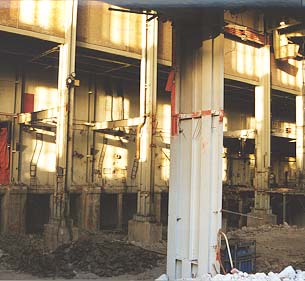 Why can't they leave the buildings in this beautiful state ?

In February 2001 Tomas thought he had discovered an unknown deserted powerstation at Heijplaat. But here you see ample proof that I visited it already two years ago :-) But during his last visit he discovered several vehicles with the ignition keys still in them and the group held an informal race on the premises. He has published several nice pictures of the site (not of the race). I've included a link to his site here.

25 February 2001 our team of explorers was active in this area. But at 17:30 I had to go home to cook dinner (I promised, my wife was going to a concert). The rest of the group went on to the power-station and tried to float a Thai hot-air balloon (with fire inside) from the roof. The approaching dusk is good time for this experiment. I still don't know if they succeeded ...

The shadow-side of the building ...

I only looked at the building from the aesthetic view, until I got this e-mail:

Back to: Urban Adventure Home